The 36-year-old actress, model, and producer has been a household name in China for years and tasted Hollywood success with a role in the 2014 blockbuster "X-Men: Days of Future Past."

But Fan, usually active on social media, has gone dark online and has reportedly not been seen in public for weeks.

"Will Fan Bingbing go to prison?" asked one of hundreds of thousands of recent postings about her on China's popular Twitter-like Weibo platform, while others speculated she had been banned from movies or was under house arrest.

Read Also
Amid tax evasion storm, where is Fan Bingbing? 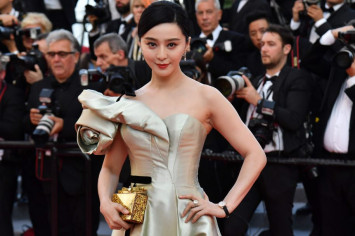 The documents Cui posted suggested Fan was officially paid 10 million yuan (S$1.99 million) for a project while unofficially receiving an additional 50 million yuan -- all for four days of work.

So-called "yin and yang" dual contract arrangements -- with one contract for income declared to tax authorities while the other is kept secret -- are reported to be used in China to evade taxes.

After the documents posted by Cui went viral, the national tax administration announced it had instructed authorities in eastern Jiangsu province to investigate alleged use of such dual contracts in the entertainment industry.

Fan was not mentioned by name but she has businesses registered in Jiangsu.

Exorbitant pay for Chinese film and television stars has been a subject of online debate for years, and Fan led Forbes magazine's list of top-earning Chinese celebrities in 2017 with income of 300 million yuan.

A statement released by Fan's studio said she was the victim of "slander", but did not dispute the authenticity of the documents Cui released.

The actress has gone unusually quiet on social media with no original postings to her personal Weibo account since late May.

State news agency Xinhua reported in late June that five Chinese government agencies, including the tax authority and the film and broadcast regulator, would crack down on excessive pay and tax evasion in entertainment.

The trend had pushed up production costs and encouraged youths "to blindly pursue stardom", the agency said.

It also re-affirmed guidelines released last year capping pay for those appearing in movies, television shows, and online programmes to 40 percent of production costs and pay for lead actors to no more than 70 percent of the budget for performers.

Fan is one of five leading international actresses cast in the forthcoming Hollywood spy thriller "355", alongside Jessica Chastain and Penelope Cruz.