Chow Yun Fat was commended for being an icon and a popular figure overseas.

During the ceremony, Chow, 66, shared his experience spanning more than four decades in the entertainment industry and thanked Hong Kong and its people for their encouragement, tolerance and love for him.

This was the third such honour for Chow, who is affectionately known as Fat Gor (Big Brother Fat). He was named an honorary fellow at the Hong Kong Academy for Performing Arts in 1999 and received an honorary doctorate from the City University of Hong Kong in 2001.

Born and raised on Lamma Island, he recalled going to Hong Kong with his mother by sea when he was growing up in the 1960s.

With several families and more than 30 people living in a housing complex, a young Chow went to the cinemas to escape the living conditions and to enjoy the air-conditioning, even though he did not know what the movies were about.

He completed an acting training course in the 1970s and began his acting career, filming from 6am to 2am daily, he said.

"I recited lines when I went out for filming and when I returned to the studio. I even recited the lines when I was sleeping," Chow recalled.

"I did that every day for nine years, and I really do not know what I have filmed if you ask me (that question)."

The actor said that the person he saw the most during that time was not his mother, but actress Carol Cheng, now 63, whom he has acted with in several TV serials such as The Good, The Bad And The Ugly (1979), The Brothers (1980) and The Fate (1981). 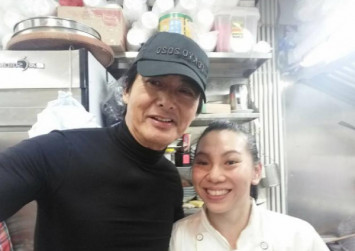 Chow began focusing on movies in 1984 and then went to film the gangster movie A Better Tomorrow (1986) with director John Woo, kicking off his "bullet-driven" career for the next decade.

"I can say I fired more bullets than the police commissioner at that time," he joked. "I fired up to 10,000 bullets a day while filming."

He moved to Hollywood in the 1990s after his contract with the TV and movie company ended and filmed movies such as The Replacement Killers (1998) and Anna And The King (1999).

He worked with director Lee Ang in the Oscar-winning Crouching Tiger, Hidden Dragon (2000), with his acting career flourishing since.

At the ceremony held on Saturday, Professor Alexander Wai, the president and vice-chancellor of HKBU, commended Chow for being an icon and a popular figure overseas who has demonstrated the unyielding and fighting spirit of Hong Kong and shaped the golden era of the Hong Kong film industry.

"Most importantly, he remains humble and grateful for what he has, and his perseverance and humility make him an excellent role model for the younger generation," said Prof Wai.