Chow revealed that he is not romantic, but pampers his wife at home.

TAIPEI - No limousine, no sweat.

That is the low-key preference of Hong Kong superstar Chow Yun Fat, who was in Taipei over the weekend to promote his new movie, Project Gutenberg.

Instead, he and his wife Jasmine took an MRT train to the Xinyi Vieshow Cinema to mingle with fans, reported Taiwan News.

His day had started early with a jog at Da'an Forest Park. Still trim and fit at age 63, he said in jest: "The young people behind me weren't able to keep up." 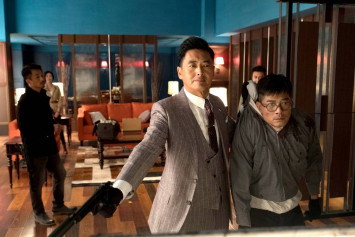 How does he ensure that his marriage is in good shape?

He revealed that he is not romantic, but pampers his wife at home. "I have to cook, wash clothes and make coffee for her."

He should enjoy a cuppa too, given that Project Gutenberg was the No. 1 smash hit at the box office during China's week-long Golden Week holiday. It earned 628 million yuan (S$126 million) from Oct 1 to Sunday.