Chrissy Teigen has broken her silence on the allegations of bullying made by fashion designer Michael Costello.

Michael claimed this week that Chrissy tried to blacklist him from the fashion community, and shared screenshots of DMs that he alleged were from her, although her team have insisted they were photoshopped.

And on last Friday (June 18), Chrissy took to Twitter to address the allegations, as well as share a lengthy statement from her representatives.

Her tweet read: “No idea what the f*** michael costello is doing. He just released a statement where he didn’t at ALL acknowledge how fake the dm’s were, & now claims to have emails that don’t exist. So while he conjures those up (hopefully with someone more talented in fakes this time), here: (sic)”

She then posted the statement in a series of pictures.

Part of the statement read: “Chrissy is completely surprised and disappointed by Michael Costello’s recent attack, which includes fictional ‘screenshots’ from 2014 of supposed private messages that Chrissy did not send."

“In October 2014, she did post a comment on Mr. Costello’s Instagram when he was publicly accused of making a racist remark. After he denied the accusation, and claimed it was based on a photoshopped comment, Chrissy deleted the comment, as was reported at the time."

“Chrissy has never conspired with anyone to harm his career. The stylist he also attacked in his recent comments was not a part of Chrissy’s team until 2016 and did nothing to harm Mr. Costello.”

Chrissy’s representatives then insisted the Lip Sync Battle star “will not stand for anyone spreading false accusations” about her.

They added: “Chrissy has acknowledged her past behavior and the pain she has caused, but she will not stand for anyone spreading false accusations to further demean her name and reputation."

"Chrissy will continue to do the work she needs to do to be the best person she can be. She hopes Michael Costello can do the same." 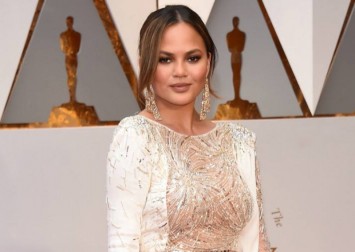 “Chrissy has every right to correct the record and defend her name."

"She is not interested in making Mr. Costello the target of harassment or abuse from anyone claiming to support her. She hopes this can be a time of honest reflection and healing.”

The model’s team claimed earlier this week that Michael’s screenshots were fabricated due to a number of inconsistencies, with examples including a missing tick next to Chrissy's name - which would date the posts as being from 2014, before Instagram launched their verification
programme - in a screenshot which featured purple and blue messages, despite the platform only introducing that design last year.

The screenshots also showed a video chat icon, which Instagram introduced in 2018, alongside a profile photo which Chrissy had changed no later than 2016.