Christopher Lee couldn't understand 50% of scripts when he was rookie actor, regrets not studying harder

Being in showbiz doesn't mean you can throw your education out of the window, just ask Christopher Lee.

In the latest episode of Dishing with Chris Lee, the 50-year-old asked his guest Kym Ng whether she thought her education helps her career in showbiz.

Christopher then revealed: "After entering showbiz, I regretted not studying hard before... I couldn't understand 50 to 60 per cent of the script [when I first started out]."

The actor studied up to Form 5 (the equivalent of upper secondary) in Malaysia before he began working odd jobs. He  made his debut in showbiz in 1995 at the age of 24 after emerging first runner-up in Star Search.

And it wasn't just reading scripts that was difficult, as even interviews stressed him out.

"Back then everyone was concerned about how knowledgeable [actors were]," he recalled, adding how he would be speechless in front of the camera.

"I spent many years trying to overcome this," he said.

Kym empathised with his struggle, revealing that she, too, struggled to become a TV host. "I cried every night, I was so scared!"

Since he's realised the importance of education, how does Christopher — who's married to local actress Fann Wong — inculcate this in their son Zed, who is in primary two this year?

"Fann and I have a common understanding that we'd introduce Zed to different things, such as exercise classes and language lessons — which help us understand our son's interests.

Read Also
'I was prepared for the worst': Christopher Lee thought career would end after drink-driving incident, planned to return to Malaysia 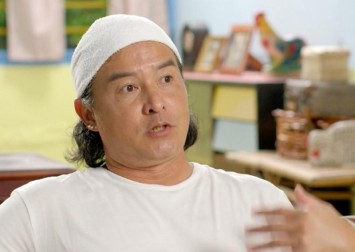 "I try to explain to him that I send him to these classes because he enjoys them, not because others are going, becauseI feel that the most important thing about childhood is having fun."

Christopher also mentioned that he tries to be less strict with Zed nowadays.

"I used to show a 'black' face all the time, I was very strict. But I realised I couldn't be like that," Christopher shared.

"After about six months I didn't want to do that anymore, because Zed started distancing himself from me! It seemed like he was closer to his mum, so I was scared."

Thankfully, Fann reassured him, saying that he will always be Zed's dad.

"Zed treats his mum and myself differently but he loves us equally," said Christopher.

Dishing with Chris Lee is available on meWATCH.