Could this be the reason for revealing the identity of Anthony Wong's illegitimate son?

Over the past week, news of Hong Kong actor Anthony Wong having an illegitimate son became widespread after a woman, Joyce, told Hong Kong's Apple Daily of the 19-year-old's existence. The 56-year-old actor has since admitted to being a father to the teenager, William, who lives in Britain.

Joyce, the mother to Anthony's illegitimate son, met the actor when she was 17 and was in a relationship with him for 10 years. She gave birth to their son about six years into the relationship, but took William to Britain two years later.

Since then, Joyce, who is reportedly the niece of actor-producer John Shum, has reportedly been married twice and has two children in her current marriage.

Similarly, Anthony married his current wife Ng Wai Zing in 1996 and has two sons with her.

Despite having separate families of their own, Anthony continued to support William financially, and reportedly even bought a house for the mother and son in Britain. He also contacted Joyce via telephone to talk about matters pertaining to their son. However, Joyce had reportedly sold the house to move to a suburban area, where standard of living is lower. 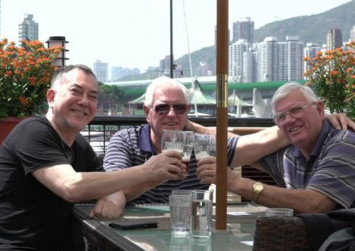 Anthony told Ming Pao Daily News that Joyce made the revelation because she was angry after he decided to deposit money directly into William's bank account since the teenager was starting university soon and would be able to manage his own finances. The actor added that he started doing so because Joyce had been keeping half the money meant for William.

Joyce, however, denied the allegations and said that after deducting money for school fees out of the HK$25,000 ($4,370) given to them monthly, she would hand over the rest of the money to William for him to save. She also said that Anthony would not be paying for William's university fees, as it will be settled through loans from the government.

When asked about her latest statement, Anthony told Apple Daily, "The matter is over."

He clarified that he was glad that the fact that he has another son has been made public, but was worried about how the attention would impact William and the people around him.