Everything seems to make Daniela Vega smile: her transition from male to female, her family's unwavering support, and her rise from hairdresser to actress with the backing of Chilean director Sebastian Lelio, who won the Oscar for best foreign film.

As Maria in the film "A Fantastic Woman" -- her fifth movie role -- Vega plays a transgender woman confronting discrimination and rejection by the family of her deceased partner. The role has thrust her into the international spotlight and made her a Hollywood darling.

And at Sunday's Oscar ceremony, she became the first transgender person ever to present a performance at the movie industry's most important event.

The 28-year-old's dignity and poise have caught the attention of media across the world, from Spain's El Pais to The Guardian in Britain and Vanity Fair and The New York Times in the United States. The US magazine W included her in its list of top 10 performances of 2017, featuring her in a photo alongside heartthrob Robert Pattinson.

The New York Times said Vega evinced "a charisma that defies pity and a sense of poise that can be both intimidating and heartbreaking."

The Guardian called Vega's performance "passionate, intelligent and with a certain understated dignity."

Friends and acquaintances describe Vega as an ambitious woman, determined to go far in her career, and one who throws herself fully into her work.

FROM HAIRDRESSER TO ACTRESS

Vega was born into a middle-class Santiago family and began her acting career in theatre plays such as "Migrants" and "The Butterfly Woman" and by taking singing lessons.

Her aptitude for poetry led her into the arts world and she appeared in a video for the song "Maria" by Chilean musician Manuel Garcia and made her cinematic debut in the movie "The Visit" by Mauricio Lopez Fernandez, in which she also played a transgender woman.

But until Lelio -- an Argentinian-born Chilean director who initially hired her as a "cultural advisor" -- cast her in his Oscar-winning movie, Vega was earning her living as a hairdresser in a salon in Santiago. 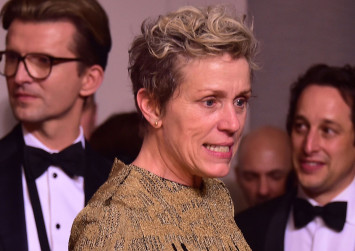 Vega's mother Sandra Hernandez told El Mercurio newspaper that when she was pregnant, doctors told her she was going to have a girl, and so she had bought earrings and pink girls' clothing in preparation.

Vega was bullied at school and under pressure from her mother. When she was 15, she turned to the internet to explore why she felt the way she did about her adolescent body, and her attraction to men. That's when she realised she was transsexual. Actress Daniela Vega talks to the media after meeting with Chile's President Michelle Bachelet at the government house in Santiago.Photo: Reuters

Those were hard times to face up to such a realisation in conservative Chile, still struggling to escape the legacy of the dictator Augusto Pinochet, who ruled from 1973 to 1990, and shocked by charges of child sex abuse in the powerful Catholic church.

But shielded by her parents and her younger brother Nicolas, she began her transition to her new sexual identity. It took three years.

"I have known the love of my family, of a partner, I have been surrounded by a great amount of love," Vega told AFP.

Vega has not changed identity or gender on her passport because this is barred under Chilean law.

The team that made the movie will be received Tuesday by Chile's outgoing President Michelle Bachelet, who in August sent to congress a bill to authorise gay marriages and adoptions.

Chilean rights groups have expressed hope that the Oscar for "A Fantastic Woman" and the mounting global recognition for Vega will help the bill's passage.

But the new government of conservative Sebastian Pinera, who takes over the reins from Bachelet on Sunday, have not made encouraging statements in favour of the legislation.