'I felt like my friend was being attacked': Dave Bautista on defending director James Gunn after he was fired over offensive tweets

It was a day of reckoning for Guardians of the Galaxy director James Gunn as his past tweets came back to haunt him.

Between 2008 and 2011, James made several tweets that joked about topics such as rape, paedophilia, 9/11 and the Holocaust. In July 2018, those offensive tweets surfaced and cost him his job with Disney despite his heartfelt apology and remorse.

To no one's surprise, the cast of Guardians — including American actor Dave Bautista — defended the ousted director, which probably helped him in reclaiming his job with the House of Mouse.

Speaking to local media for Netflix's zombie heist Army of the Dead, 52-year-old Dave explained that he spoke up for James because that's what friends do.

He said: "The thing with James was very personal. I felt like my friend was being attacked and I wasn't okay with it because he was being wrongfully attacked. And so I didn't have an issue with us (the Guardians cast) standing up for him because it's something I would always do. It's something I've always done all my life.

"What kind of friend are you if you're not defending your friends who are under attack? And the answer is, you're not a friend."

His willingness to be outspoken may have stemmed from the need to right a wrong for his friend, but it quickly moved beyond that as the political climate in the US worsened. For the record, the actor is openly anti-Trump and even offered a US$20,000 ($26,725) reward for the arrest and conviction of the person who wrote "Trump" on the back of a manatee.

If there’s not already a reward for the arrest and conviction of the low life scummy MAGATs that did this I’ll throw in $20,000. And I promise there will be bonuses to that reward! https://t.co/CGa2EIhrEQ

Dave added: "Then I felt like I was an obligation; like it was a matter of integrity because if I just stepped aside and didn't say anything, then all that's out there is a one-sided opinion. And that side's opinion is very aggressive...

"So it's not like I wanted to be there. It's not like I enjoyed being there [or] I was looking for a fight. I felt like, in order to be able to live with myself, I need to share my opinion because it's an opposing opinion to this. And if I'm willing to put myself out there, then maybe people will follow suit. People who are not as brave [or] who normally wouldn't speak out...

"It's really, I mean, it's just a horrible place, a horrible climate. I can't even tell you how many threats I got, how many false accusations I got."

Working with Zack Snyder was "amazing"

Though he may not be able to go toe-to-toe with naysayers on the internet, Dave will get to flex those muscles — and he's swole — when he tumbles and brawls with zombies in Army of the Dead.

In the film, Dave plays Scott, a mercenary who gathers a group of companions — including daughter Kate (Ella Purnell) — and attempts to pull off the greatest heist ever while navigating the zombie-infested Las Vegas.

It was a sweet payoff for him, though, as it was previously reported that Dave passed on the opportunity to work with James on Suicide Squad for this role. Not only was it a highly-anticipated chance to work with director Zack Snyder, but the role was a leading role and would help him establish a working relationship with Netflix.

As he told Digital Spy, it was the smarter decision to make professionally.

And working with Zack was "amazing", Dave confessed during the interview.

Read Also
'All of that pain and joy': How Zack Snyder's own experience shaped father-daughter relationship in Netflix's Army of the Dead 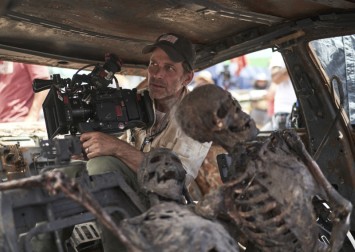 The Marvel star was a fan of Zack ever since he watched 300 and Watchmen, and their collaboration was a long time in the making.

He recalled: "When I first met him, we had talked about a different project that wasn't Army of the Dead... So we talked about that. We discussed that for years and tried to get it made, but we just just couldn't get it done."

So, when the opportunity for Army of the Dead came knocking, Dave was ready to turn it down because he thought "it was just going to be another action film". He didn't change his mind until he read the script.

He said: "Then I had a conversation with Zack about what he wanted to do and how he saw that film visually, and also how he saw the character of Scott Ward and what freedom he was willing to give me. And I jumped all over it. This is the opportunity that I've been waiting for for a long time."

With his turn as the lead actor on this action film, Dave has shown that he has the chops to be a leading man in this genre. Who knows, he might even give Dwayne 'The Rock' Johnson a run for his money.

When asked by AsiaOne about how he felt establishing himself as leading-man material, Dave replied: "I feel like right now, it's the perfect movie at the perfect time. I really think it establishes me as a very solid lead because there's so many layers to Scott Ward."

Dave said that there aren't a lot of opportunities for actors (in general, but also for himself) to play such a complex character and he felt that he "really accomplished a lot in this film".

"This is kind of the perfect time in my career where I needed this - this type of film and this type of role. So yeah, as a whole, I think is a huge opportunity for me."

He has also watched the film numerous times — both to critique himself and to appreciate it as a fan — and "every time I watch it, I come away feeling better and better about it".

"I really hope people love that film. I'm very proud of it. And I hope this opens doors for people to see me as a well- rounded actor," Dave said.

Army of the Dead premieres on Netflix today (May 21).