They say good things come to those who wait.

And after seven long years, local radio DJ Dennis Chew has finally found the one... house. The reveal about his new digs was made via his Instagram account yesterday (Aug 18) when the 47-year-old announced that he had completed his groundbreaking ceremony.

For the uninitiated, a groundbreaking ceremony is a feng shui ritual that is performed before a construction project to ensure that it runs smoothly.

The actor confirmed with AsiaOne today that his new apartment is a maisonette, though he did not reveal where it's located at.

He also said he paid a "reasonable price" of $500,000 for it, and had been looking for the right place for a long time.

"I've been looking for seven years and I like houses that are very bright and this is the perfect one," he told AsiaOne over text.

"It's love at first sight. I had to keep cool when I first entered but inside, I was screaming with excitement."

This isn't the first house that Dennis has bought, but he stated that it'll be one that he will stay in. Dennis, who shares a close relationship with his parents after his Aunty Lucy role mended the rift with his dad, is also not moving too far away from them.

Read Also
Kneeling down to 'bai nian'? 'Twinning' on outfits? Tay Ping Hui and other celebs on their favourite CNY traditions 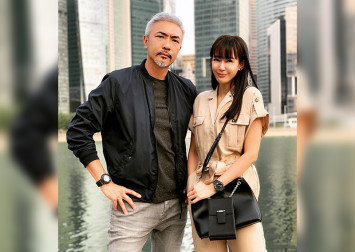 He said: "I'm staying very near my parents now. They told me they will come as and when they like. I don't mind. My mum is very chatty and sometimes loud so her voice will brighten up the house even more."

The apartment shown in his IG post is bare, which is to be expected as renovation works will commence. However, Dennis has no specific concept for his interior design, electing to let his designer surprise him.

He also confessed that the Covid-19 situation affected his renovation works and moving-in date but it can't be helped.

"Bo bian (No choice)... everyone was affected. I just hope everything turns out good," he said.