Desmond Tan and Rebecca Lim at a press conference in 2015.

It was one of the biggest mysteries in the local showbiz industry and now, Desmond Tan is finally shedding some light on it.

In the most recent episode of Hear U Out — a meWATCH talkshow by local host Quan Yi Fong ⁠— the 34-year-old actor spilled the beans on his friendship with fellow artiste Rebecca Lim and what caused the rift between the former BFFs years ago.

Simply put, it was a misunderstanding between the two celebrities. Desmond didn't go into the specifics despite Yi Fong's probing, but he described it as something that could happen to anyone. However, he admitted that he did something wrong and didn't realise it.

Desmond only caught wind of it later on and he confessed that it was "a little dumb".

"We were both busy with our lives and we stopped contacting each other as much. But I thought it was natural. We were all busy with our own careers. Then I realised we had slowly stopped talking to one another. So I asked and that's when I found out about this misunderstanding," he said.

He can't remember whether he asked her personally or if someone told him about it, but he revealed that there were people "caught in the middle" which he felt bad about.

Right now, the actor has yet to find a solution to their issues, but he remains optimistic that the former BFFs will be able to "talk it out one day". 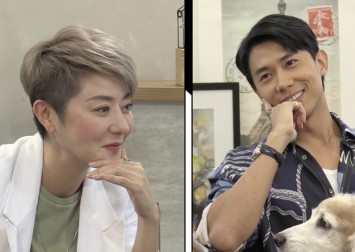 At the very least, he still considers her a friend because the two were really good friends before they joined the industry and "that is hard to come by". In fact, Desmond encouraged Rebecca to join the industry when she was caught between being pursuing a career as an actor or a doctor.

Similarly, it was Rebecca who persuaded Desmond to take part in Star Search 2007, which opened the doors for him as an actor.

"I still think we are friends because life is like the four seasons. Sometimes it's spring, sometimes it's winter. Sometimes things move slower and it feels like it has stagnated. I think we're still friends," he said, adding that the two still talk about work but that they "just can't go back to how it used to be" where they would "go out for meals and stuff".

The duo had been famous for being BFFs and at one point were even rumoured to be together. Desmond himself once said he had considered going after Rebecca but decided against it to avoid ruining their friendship. However, their friendship grew cold in 2015 and the reason behind it was never publicly addressed until now.