Desmond Tan may be a household name now, but his journey to the top of the Singaporean entertainment industry wasn’t always so clear-cut. In 2007, fresh out of National Service and waiting for university to start, the then 21-year-old was serving a two-week retail stint that made him utterly miserable when his friends nudged him towards Mediacorp’s Mandarin talent contest Star Search.

“I got into the finals and deferred my studies by a semester; when I graduated, I told myself, why not give it two years in the industry and if things don’t work out, I can always just go back to what I studied, which was real estate,” he shares. We will never know Desmond Tan the real estate whiz, for things did work out and he has been mesmerising Singaporeans on screen for 14 years now.

The actor, who has a Star Awards Best Actor win and five of its Top 10 Most Popular Male Artistes trophies under his belt, has come a long way since. “Back then, my priority wasn’t so much about the performance—it was about getting onto national TV; chasing fame,” he says candidly.

“But over the years, I developed a little more interest and that grew into a love for my work, which then turned into a passion.” These days, passion doesn’t even begin to describe what he feels about acting.

“I’d say it’s an addiction—especially this past year where we’ve been staying home more and working less, I actually had withdrawal symptoms. I felt so happy when I could go back to work—I feel alive when I’m on set.”

Difficult as that enforced timeout was, it also allowed Tan, who turns 35 this month, to reflect on what he has done and where he wants to go next. “The past 10 years, I was just working non-stop and then in 2020, we had two months where we had to stay home.

That was when I really reconnected with myself and started to evaluate my priorities,” he says. “In the past, when I was doing project after project, I didn’t think any deeper about the work—about how else to do things or the ways in which I can improve.

During the circuit breaker, I had time to study my past projects more closely and I noticed so many areas that can be improved. I’m clearer now about what I need to do and what I want to achieve—I want to do better in terms of my performance.”

In addition to thinking deeper, Tan is thinking bigger. “The challenge for the future,” he lets on, “is seeing how much further I can go. In terms of geographical boundaries, can I reach out to a broader Southeast Asian market? Am I able to play in the really big leagues like Hollywood and China?

These are things I’ve definitely been thinking about more this past year, as I’ve been watching a lot more international productions. It’s ironic because even though I work in the film industry, I’ve never had time to watch a lot of stuff. And then, with the stay-home period, I just binged, and I really got to see new trends and techniques that I want to try in my work.”

Passionate as Tan is, it doesn’t always come easy. “We’re only human—we feel the flame on some days and lose it on others,” he says. “And when that happens, you start questioning yourself: Is this worth the sacrifice? How do you keep reigniting that flame?”

In moments like these, Tan focuses on the joy he derives from acting: “It’s an emotional outlet for me. Growing up, I didn’t really express myself that much and I didn’t really understand my emotions. I was a typical Singaporean whose only expectations were to get a 9-to-5 job, get a mortgage, get married, have kids.

Acting allowed me to think deeper. Being immersed in a role allowed me to be like a mirror—reflecting things back to people—or to play things so much larger than life that it opens up people’s minds. Even now, I find it amazing; every few months, I get to explore completely different things. Even when I play villains, it’s interesting because I get to explore the dark side of human psychology.”

Immersing himself in a diverse array of characters has also helped Tan grow as a person. “Compared to the person I was 14 years ago, I think I’ve become more sensitive,” he declares.

“I was more reckless before—just shooting off my mouth without thinking much about how others would feel. These days though, there’s an additional layer of thinking before I say anything because words do carry weight. And I’ve realised that it’s not always about proving a point to win a battle—you can’t convince the whole world to think the way you do, so I’ve just learned to embrace differences more.”

Read Also
Benjamin Kheng: 8 things to know about him (besides his singing) 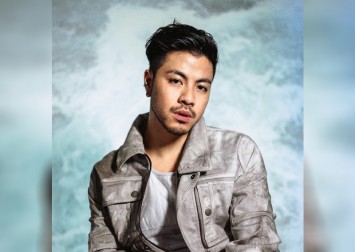 Another thing that Tan has learned to embrace is change. “We can’t just keep using the old methods of doing things—we will become obsolete,” he asserts. Social media is a good case in point. “When I started, there was only Facebook. I got on Instagram relatively late,” he admits, only actively posting since 2012, “because for the longest time, I felt like I didn’t want to expose my life.

Putting yourself on a new boat and learning how to row it is tough, but if you never try, you’ll never know.” He brings up a recent interaction with his young niece: “She came over and I was showing her my sound system; she started to play Blackpink and when I sang along, she was so amazed, ‘You know Blackpink?!’

The moment she realised that I was speaking her language, she looked at me differently. That’s when I realised that we can’t lose touch with changes, especially when it comes to the new generation — it’s not just about being passionate; it’s about being relevant. Maybe you have to start wearing more hats, but that can be fun too.”

Having been a part of the industry for more than a decade, there are certain changes that Tan would love to see being embraced. If it were up to him, his first priority would be fostering a sense of togetherness. “Being a small nation, I think the only way to grow our work and take it to a bigger stage is to work together,” he says.

“For some strange reason, locals don’t really support locals. There’s always this sense that you have to leave first, make your name overseas, then come back to be taken seriously.

I remember seeing it when I was younger, with singers such as Stefanie Sun and JJ Lin. I believe that if we come together and synergise our resources, all 5 to 6 million of us as a nation will have a much bigger voice than if we continued staying in our own little bubbles.”

This article was first published in Harper's Bazaar Singapore.