Dolly Parton sleeps in makeup in case of emergency at night

Dolly Parton sleeps in her makeup just in case there's an "earthquake or storm" in the middle of the night.

The 9 to 5 hitmaker has revealed she doesn't clean her face before she goes to bed, because she doesn't want people to see her without her makeup on if there's an emergency which forces her to leave her home.

She said: "I do all my beauty work and cleaning my face in the morning because I usually try to keep my makeup on at night. Because I never know if there's going to be an earthquake or a tornado or a storm and I'm going to have to go out in the middle of the night!

"I don't like to go home and just tear down completely, because my poor husband has to look at me. And in the morning when I get up I start all over again, put on my makeup and then touch it up through the day."

The 75-year-old country legend also spoke about her exercise regime, and said she does "rejoicing exercises" every morning to keep herself both physically and mentally fit.

She explained: "I create my own rejoicing exercises! I grew up in the Pentecostal church where we used to do a lot of shouting and jumping around. I keep my motor running in the mornings when I just shout through the house praising the Lord.

"It gave me an idea to create some easy exercises, and I'm making music to go along with it. Something that even people in wheelchairs or people that are older or sick can do."

But Dolly doesn't over-exert herself, and said she hates going to the gym because she's "particular" about who she surrounds herself with when she works out.

Read Also
Dolly Parton gets her own flavour of ice cream 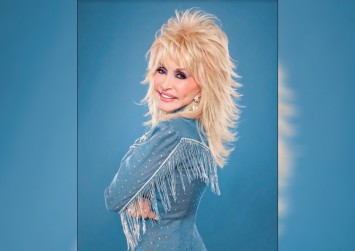 She added: "I thought I could create something joyful, where you were doing something for a reason rather than yourself. But that's the extent of my exercise. I'm not big on going to the gym… and I'm particular about who I sweat with."

The Jolene singer went on to talk about some of the lessons she's learned over the past year amid the Covid-19 pandemic, as she said she's been practicing making "other people try to feel good".

Speaking to WSJ. magazine, she said: "I think we've been held up to the light. I know I've learned a lot about myself, and by doing things to help other people, it's helped me, too. Because you know the old saying, 'By teaching I am taught'.

"By making other people try to feel good and lift them up, it's lifted me up. Doing something to make somebody else feel good, in turn makes me feel good. That has really provided a lot of solace for me."