Samantha Markle - who shares the same father, Thomas Markle, as the former Suits star - has lashed out at her estranged sibling once again as she believes she deliberately announced her and husband Prince Harry's plans to step back as "senior royals" on the eve of Kate's 38th birthday on January 9 because she wanted to "ruin" her special day.

Speaking to the Daily Star Online, Samantha said: "Sad she would do that on Kate's birthday - I believe she was jealous of beautiful Kate. She could never compare - Kate is iconic!

"Perfect Queen material and lovely as a family member especially as a mother.

Last July - six months before the couple announced their plans to spend more time in America - footage emerged of Harry, 35, speaking to Disney's Bob Iger at the London premiere of The Lion King.

The flame-haired prince reportedly asked the franchise boss to give his wife a job as she has a lot of "interest" in doing voiceover work following her role on the legal drama show.

Samantha has slammed Meghan for "throwing herself" at Disney in a bid to get a job out of them.

She explained: "The Disney move would have been fine if initiated after leaving royal roles but seems inappropriate prematurely. And disrespectful of royal protocol. It's like cheating on a spouse and giving a phone number for a dinner date before being divorced."

Since deciding to step away from the royal family, Meghan and Harry have moved to Canada with their son Archie, nine months, and friends believe the decision has brought them even closer together.

A source said recently: "They are besotted and very sweet with each other. Archie is the priority. It's very much still about taking care of him and putting the family first. He's a happy kid -- he loves to laugh. Archie and Harry have such a good time together. And Meghan is a great mom. She's very much about tending to him. They are trying to live their life as regular parents. 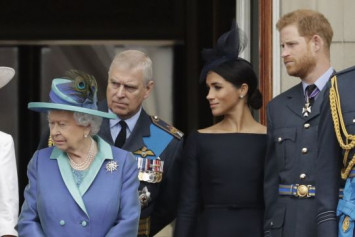 "They are real homebodies who love to chill out with Archie and the dogs."

The pair - who tied the knot in 2018 - are currently residing in Canada but are also hoping to buy a house in Meghan's home city of Los Angeles.

The insider said: "They love being in Canada, but they are looking at houses in LA too. They'll likely have houses in both places. It's full throttle for them right now.

"They have a lot happening in 2020, and it will be really exciting to see."