Taiwanese singer Elva Hsiao has decided to stay silent no more and will be taking legal action against media outlets spreading malicious and untrue news about her.

Elva has not been seen in public for more than 18 months, sparking nasty rumours that the 39-year-old was suffering from HIV, the incurable virus that leads to Aids.

But according to the magazine Mirror Media, the reason Elva had to halt her work was acute bronchitis.

The Mandopop star had been ignoring the HIV claims as she believed that "gossip dies at a wise man's ear."

The last straw came on Mothers' Day (May 12) when Elva saw a publication reporting about the fake news while she was remembering her late mother, who passed away in 2010.

"When silence is now 'shock', I have decided to stay silent no more for my mother's sake.

"I will be taking legal action against all media outlets that report on unverified news (about me). I hope that everyone will stop hurting my mother," Elva wrote on Instagram last night (May 13). 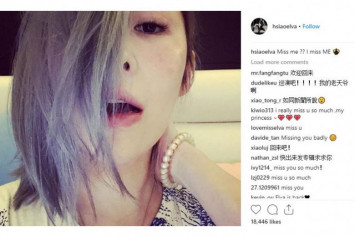 Elva, who at her peak was one of Asia's biggest female celebrities, also opened up about her condition.

She revealed that her throat and stomach have not been well the past year, which led to bouts of vomiting, among other things.

Elva ended the post by saying: "The doctor said that I can only slowly recuperate so I can only be patient and try my best to recover soon," and thanked her fans for their support.

Her condition reportedly prevented her from staging a series of concerts in April last year.

#celebrities #Aids/HIV #BRONCHITIS #In Case You Missed It