Actor Ewan McGregor poses at the world premiere of Disney's Christopher Robin, in Burbank, California, US.

Ewan McGregor says his divorce was like a bomb detonating in his family.

The Star Wars actor, 51, had been married to Eve Mavrakis, 56, for 22 years when pictures emerged of him kissing his 37-year-old Fargo co-star Mary Elizabeth Winstead in 2017.

Finally admitting the damage his affair did to his loved ones, Ewan said: "A divorce in a family is a bomb going off in everyone's life - my children's lives.

"The, sort of, healing of that is on-going."

He is now appearing in You Sing Loud, I Sing Louder, a film which also stars Clara who wrote the screenplay. 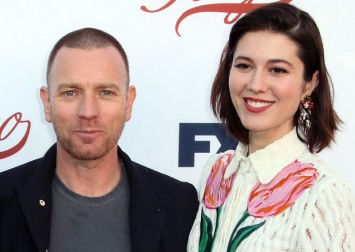 It tells of a father taking his daughter to rehab and is loosely based on Clara's recovery from an addiction to prescription drugs.

Ewan added to GQ magazine: "She tells me she'd come up with an idea about writing about us.

"At first, I was a bit nervous - I didn't know what that meant. I sat down to read it and I was blown away.

"It was a beautiful story about us. There're things that aren't accurate or are bent - but they still reflect our estrangement for a while."

Clara later apologised for her remarks about Winstead, admitting they weren't her "finest hour".

Ewan and Mary, who share one-year-old son Laurie, were reported to have married in April.