Former Hong Kong actress Theresa Lee may have been missing from our screens for quite some time but she's evidently not been forgotten.

Known for her sweet looks and candid personality, the former beauty queen was last seen on the small screen back in 2019 for a travel programme broadcast on Viu.

Her most recent appearance on social media, however, has got netizens twittering about how different the 52-year-old looks now.

From reports published on Tuesday (Sept 13), Theresa was bare-faced in her selfie with nary a stitch of makeup.

The shot offered netizens a close-up look at the pigmentation on her skin, bags under her eyes as well as lines on her face and neck — all of them undeniable markers of age.

Her frail-looking appearance also had netizens wondering if all is well, reported Sina.

Ever the straight-shooter, Theresa openly joked that the blemishes aren't caused by skin sensitivities. Instead, she pointed to menopause as the likely cause.

Her frank admission had netizens applauding, reported Oriental Daily, with some stating that "women who age gracefully are beautiful".

Read Also
'It's no issue': Aileen Tan admits to editing her photos for social media 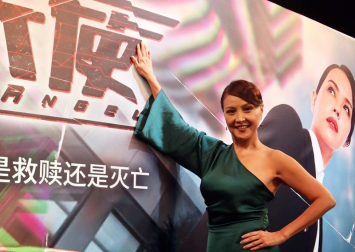 It's not the first time, however, that she addressed comments on her looks, reported Yahoo.

Previously, she'd retorted that "it's true, I've aged", adding that it was an "enjoyable process".

The Hong Kong-born Canadian, who currently resides in Canada with her husband and son, also clarified that she has not officially retired from showbiz.

She explained that the lack of roles offered could be due to her age as well as her location.

Theresa had her start in show business back in 1994 when she emerged second-runner up in the Miss Hong Kong pageant.

She has appeared in more than 20 films and almost just as many dramas, playing memorable roles such as Guo Xiang in Condor Heroes 95 and in 1999's The Legendary Siblings, where she played the love interest of then-heartthrob Jimmy Lin.

She relocated to Canada after marrying her Canadian husband in 2004.