Excelsior: 5 things you might not know about Stan Lee

Stan Lee, the visionary creator of iconic Marvel Comics characters such as Spider-Man, the X-Men and the Avengers, has died at the age of 95.

As first the editor-in-chief and then publisher of Marvel Comics, Lee was a key figure in building the massive following for pulp superheroes.

Marvel later expanded into the movie business, which culminated in Disney's 2009 takeover for US$4 billion (S$5.5 billion).

Their films have enjoyed huge success, with one of the enduring constants being Lee's many cameos, of which the latest was in Venom last month.

They serve as reminders of Lee's stature for new generations of fans and remain the public's most well-known impression of him.

So what else about Lee's life should you know, as the world celebrates his legacy?

Call it circumstances, call it fate, Lee had to take over the reins at the company later known as Marvel at the tender age of 19.

Probably less a result of pure talent, Lee was promoted when the incumbent got into a dispute with the publisher.

Lee, who was supposed to be the stop-gap measure, would keep the job for 31 years.

2. Stan Lee once gave up on comics

One might think for someone synonymous with comic books, Lee must have spent an entire lifetime devoted to the craft.

In fact, Lee had moved on to other genres like romance, comedy, science fiction and horror, after becoming disillusioned with the comic-book medium.

It was only when DC Comics' success with superheroes in the 1950s prompted rival Marvel to join the game that Lee was urged by the bosses and his wife to give comics another shot.

This time, he insisted on doing what he wanted.

Out came the Fantastic Four.

With his iconic sunglasses and moustache, Lee was frequently seen in movies, at Marvel events and at comic-book conventions.

But despite his reputation in the industry, Lee actually stopped writing comics more than 40 years ago.

The major characters he co-created, from Black Panther to Loki, arrived before 1972.

He assumed the role of publisher after that, becoming more of a face and ambassador for Marvel. 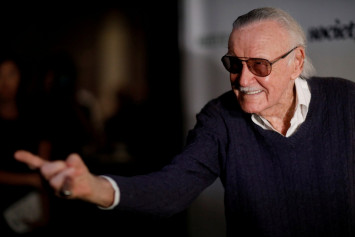 4. Stan Lee is not that rich

Lee is worth around US$50 million, let's get this out of the way.

But if you think that as the father of fictional characters worth billions of dollars today, Lee would be among the planet's richest, you'd be wrong.

Lee did not own his characters and, like other Marvel employees, earned no royalties. He also did not get a cut from the Disney deal.

When Lee sued Marvel in the 2000s over the income generated by his characters, he settled for a one-time payday of US$10 million.

Despite working in a field he initially dismissed as trivial, Lee eventually found a way to use his platform for social causes.

He believed in addressing issues such as racism in both his comic books and his later work.

Marvel introduced black superheroes Black Panther and Falcon at the height of the civil rights movement.

Given that a movie about the former was only released this year speaks to how ahead of his time Lee was.

Lee also believed in pushing other boundaries with comics.

When a regulator was formed in the 1950s, comic-book publishers had to make their content kid-friendly.

Lee saw a bigger role for his preferred medium and inserted an anti-drug storyline into Spider-Man.

The series was a hit despite the authority's disapproval and heralded a change in the public's perception of comics.