Experience the music of iconic British bands at Beerfest Asia 2018

UK band Coldplay may be busy working on their latest album on the other side of the world, but their Grammy award-winning music can still be experienced through tribute band, 'Viva Coldplay', right here in Singapore.

The international-touring band will be playing for the first time at Beerfest Asia 2018, where fans can expect note-for-note renditions of Coldplay's greatest hits.

Beerfest will be back for the 10th year running from August 30 to September 2, at The Meadow at Gardens by the Bay. 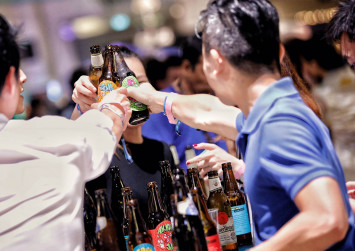 The event promises to be the best version ever, featuring a four-day jamboree of beer, food, and fun programmes for both adults and kids.

While indulging in food and drink, partygoers can also groove along to a solid lineup of live music performances and DJ acts within the tents.

Back by popular demand is another tribute band, Killer Queen, which takes on the iconic music of English group Queen for the sixth time at Beerfest Asia. And it's no coincidence that its lead singer, Johnny Blunt, looks uncannily like the band's late lead singer, Freddie Mercury. Johnny was chosen from a world-wide audition search to play Freddie Mercury in a British documentary on his life, and was a finalist on a French TV look-alike competition.

If the music of Bono and U2 is more your...or mug of beer, The U2 Show: Achtung Baby, will feature a fully-choreographed performance incorporating costume changes and visual effects as seen in actual U2 concerts. Besides the three tribute bands, a lineup of talented local acts will also get everyone rocking to the beat of Top 40s, rock and pop. Acts include The Common People, Rock Rosettes, and Supersonic, among others.

More information on Beerfest Asia 2018 can be found on www.beerfestasia.com or www.facebook.com/beerfestasia.

Here's how to enter: