The family of late K-pop star Kim Jong-hyun, who died after he committed suicide in December 2017, have set up a foundation to help young artists and people struggling with mental health stress.

Magazine Esquire Korea uploaded on their Instagram a preview of their interview with Kim's mother Lee Eun-kyung on the Shinin foundation, which was launched on Thursday (Sept 6).

The K-pop singer from boy band SHINee, who went by the name Jonghyun, was 27 when he died in a Seoul apartment. He left behind a suicide note which suggested that he was suffering from severe depression when he took his own life.

Mrs Lee is the director of the foundation named after Kim's song Shinin', which was released in his posthumous album Poet | Artist.

She told Esquire that the foundation plans to help young artists who struggle due to a lack of management and work with performing arts high schools to create scholarship opportunities. It will also set up a psychological consultation centre which will help to support young artists who might be scarred by working in the entertainment industry.

She said: "In my pained eyes, I can see so many youths who are in so much pain right now." 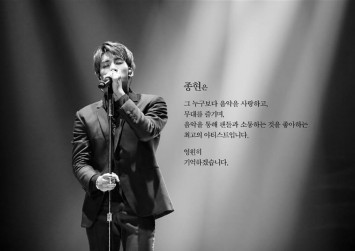 Kim's death prompted an outpouring of grief from fans and celebrities alike in South Korea and launched a national conversation about mental health issues in the Asian country, where mental health still carries a stigma.

His mother told Esquire: "Till now, it still hurts when I go somewhere and I hear music playing that has my son's voice in it. But even though my son has gone, there are people who love and enjoy his music, and for that I am always grateful."

The Shinin foundation held a small opening ceremony on Thursday in Cheongdam-dong in Seoul. The foundation will be funded with the royalties collected from Kim's music. It also plans to hold an arts festival every December to commemorate and celebrate Kim.