As if beleaguered Chinese actress Fan Bingbing doesn't have enough problems of her own, the country's highest-paid celebrity has just been accused of yet another transgression.

Her 'crime' this time, however, is against the Chinese language, according to one high school teacher in Hangzhou.

The teacher, identified only by her surname Qiu, decided to use Fan's apology note posted on her Weibo account as a prime example of common language errors to avoid. The 37-year-old movie star had issued a public apology after being fined 883 million yuan (more than S$176 million) for tax evasion.

Talk about kicking someone when she's down.

Qiu told Qianjiang Evening News that Fan's post came just as she was preparing her semester-end revision lesson for her high school class of 15-year-old students.

She immediately noticed 10 punctuation and grammar mistakes in Fan's lengthy note, published on Oct 3. So, the night before her lesson, Qiu decided to turn her letter into an exercise "for the students to pick apart".

According to the Epoch Times, Qiu's experiment was a huge success.

The students were taken aback at first but soon got excited to tackle the unusual exercise. 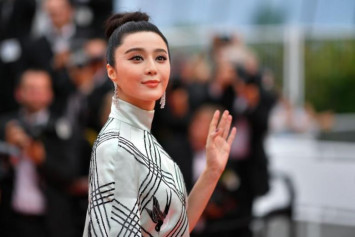 Before long, they were able to pick out all 10 errors in the note, and some were even able to pinpoint other errors that Qiu had missed.

One netizen mused that Fan's suffering "has reaped abundant rewards", as through her scandal, she not only taught other celebrities the importance of paying their taxes, but also schooled a young generation of students.

Words that offer cold comfort to Fan, we're sure.