Aside from starting her bakery Fanntasy during the Covid-19 pandemic, the 51-year-old also ventured back into illustration.

"After 16 years, I've once again picked up my pen to create," she said on an Instagram post two days ago that revealed her latest artworks.

She first released her semi-autobiographical comic book Girl Illustrated in 2004.

But drawing again wasn't easy for her initially, she admitted. In an interview with Lianhe Zaobao on Feb 6, Fann said that the entire process of story and illustration took almost a full year to complete as she was quick to criticise her own art at first and had to redo her illustrations multiple times.

Elaborating further, she said being an illustrator was something she aspired to as a kid. Returning to her childhood dream and publishing the books gave her a sense of pride and accomplishment.

Surprisingly, Covid was the unlikely hero that presented Fann the opportunity to return to her illustrative work. "Because of the pandemic, I wasn't able to fly to the many places I would have needed to for filming," she explained. "I had a lot of creative ideas while I'm in Singapore." 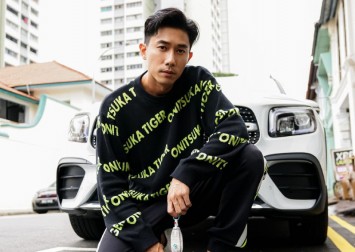 She was also unwilling to leave her son Zed alone while her actor husband Christopher Lee is overseas for filming. "My husband is not in Singapore. If he was, I'd be able to leave for a month or two," she said, regarding her plans for filming in Taiwan that eventually fell through.

When the Taiwanese publisher Light Press approached her to create children's picture books, she found it a good outlet for creative expression.

Out of the four books slated for release, the two that will be released this Thursday are — loosely translated — Awesome, the Loud Little Boy and the Planet Virus. The stories are presented in traditional Chinese and English.

Here are quick synopses of the two books:

Awesome, as his name states, is awesome at almost everything. Quite simply a nigh-perfect child, few can fault him, whether for his physical skill or eating habits.

Unfortunately, he has one egregious flaw: He has a habit of being obnoxiously loud when he speaks. When he encounters a very special ice cream shop, however, he must learn to change this habit.

According to the synopsis on Kinokuniya, this story aims to educate both parents and children alike, advising on how to rid bad habits by understanding empathy and putting yourself in others' shoes.

A timely piece on personal hygiene, Planet Virus features the king of said planet and his aim: To attack Earth and infect people with various diseases and ailments. As with any war, intelligence is key — the king sends two soldiers as advance scouts for reconnaissance.

Upon encountering two boys, these two soldiers decide to hold a quick battle of strategy and determine who can infect either boy at the greatest speed.

The synopsis on Kinokuniya said that Planet Virus is a tale of hygiene habits and stresses the importance of good hygiene in preventing illness, which is certainly a good read for children facing the risk of Covid-19.

Pre-orders are available on Kinokuniya.

READ ALSO: Xiang Yun reveals how she got her kids to learn Mandarin