It's not a secret that celebrity sightings are common in Los Angeles (LA). It is the heart of Hollywood after all.

However, what most might not expect to see are some of the biggest names in K-drama walking about in that neck of the woods. On Nov 9, a lucky netizen went on Weibo to share her encounter on meeting South Korean actor Lee Min-ho who was having a meal in Koreatown (a neighbourhood in LA).

She decided to ask him for a welfie and he acceded to her request, gamely posing for the photo without a mask and flashing a huge smile.

In the few photos that she shared, Min-ho, 34, can be seen at a restaurant dining with a group of people and the netizen expressed surprise when she spotted Squid Game actor Lee Jung-jae.

The pair, along with other K-drama stars, were in LA to attend the Art+Film Gala 2021 that was organised by the Los Angeles County Museum of Art.

A post shared by LA County Museum of Art (@lacma)

op’s friend showed them student #16 lee dongmin who was doing an english presentation. eunwoo was trying so hard not to show he was cha eunwoo by putting on a mask during his presentation and firmly putting on his glasses. they also said his eyes were so handsome (like a) deer ++ pic.twitter.com/NARv5NCatN

On the subject of celebrity sightings, this one was a little less flashy but left fans feeling more enamoured with their idol.

According to a netizen on Twitter, a friend (who attends Sungkyunkwan University) sent them a picture taken of a student in an online class and identified him as actor and boy band Astro member Cha Eun-woo.

The student in question wore a mask and was identified as Lee Dong-min (Eun-woo's real name) but the netizen's friend seemed convinced that he was the K-pop idol due to his eyes and a trophy on the shelf behind him.

Eun-woo, 24, enrolled as a Performing Arts student in the university in 2016 and has been recognised on campus before.

He is adored by many and has a reputation for being smart and the perfect guy. This chance virtual meeting only cemented that reputation as fans gushed over how hardworking he is.

LOL this article is so misleading.. He actually need to do 10 turns and answer multiplication questions within a second..
This is why we shouldn't judge anything quickly before knowing the details.. pic.twitter.com/NHp7NZ3rly

A simple mathematical question stumped Enhyphen member Park Sung-hoon and now netizens are divided due to an online poll that was created.

The boy band member was seemingly on a variety show and was asked to solve what "4x7" is. However, he was unable to answer it within the allotted time.

According to a tweet, Sung-hoon had to spin around 10 times before answering the question. It's unclear how much time he was given. 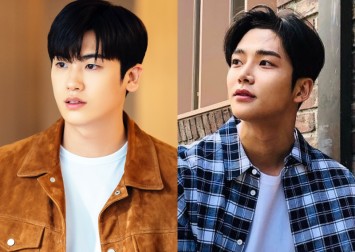 Allkpop reported that a thread was created on an online community forum about the 18-year-old's snafu and called for netizens to choose between two options.

One was in support of Sung-hoon — citing his trainee status as a reason for it being acceptable — while the other wasn't.

Understandably, netizens were torn, with some agreeing that it's unacceptable for him to not know the solution to a simple mathematical equation, while others felt like the show did him dirty.

They said the show should have shown his figure skating clips to put him in a good light, argued that it's possible he doesn't know because he's an idol, and that he was put on the spot and it was too sudden for him to get the right response.