The Federal Bureau of Investigation (FBI) had a 270-page file on the late Aretha Franklin after spying on her for 40 years.

The Queen of Soul – who died of cancer in August 2018 aged 76 – was reportedly the target of surveillance, subjected to false phone calls and had her inner-circle infiltrated by spies, according to documents obtained by Rolling Stone from the organisation.

According to the outlet, the lengthy file – which is heavily redacted – is filled with phrases such as "Black extremists," "pro-communist," "hate America," "radical," "racial violence," and "militant Black power" and was filled with suspicion about the singer, her work, and the activists and entertainers she spent time with.

The FBI regularly tracked the Respect singer's addresses and phone numbers and seemed to be particularly interested in her civil rights work and association with the likes of Martin Luther King Jr (MLK) and Angela Davis.

Among the documents obtained by the publication – some of which are newly-declassified – is a 1968 report on the funeral plans for Martin Luther King Jr, which described it as a "racial situation".

It further noted: "Sammy Davis Jr, Aretha Franklin… of this group, some have supported militant Black power concept… [performance at MLK memorial by these prominent entertainers] would provide emotional spark which could ignite racial disturbance in this area."

The agency failed in attempts to connect her to the Black Liberation Army and other so-called "radical" groups, with one document detailing Aretha's recording contract with Atlantic Records "just in case" her business dealings could be connected with the Black Panther Party.

In addition to the surveillance reports, the file also contains letters and reports of death threats made against Aretha, though information about the suspects in a number of incidents – including a threat from a man to kill her and her family and a separate extortion attempt – was redacted.

Aretha's son Kecalf Franklin is unsure whether the singer knew she was under surveillance but thinks it was a "waste of time" to spent so many years following her "every move" after the bureau failed to link his mother to any type of extremist activity. 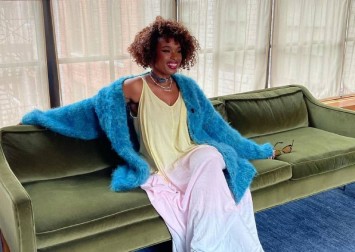 He said: "I'm not really sure if my mother was aware that she was being targeted by the FBI and followed. I do know that she had absolutely nothing to hide though...

"It does make me feel a certain way knowing the FBI had her targeted and wanted to know her every move.

"But at the same time knowing my mother and the way she ran her business, I know she had nothing to hide so they wouldn't have found anything and were wasting their time. As you see…they found nothing at all."

Some documents indicated there may be additional materials in the FBI's possession and Rolling Stone have asked them to make available any and all additional records.

The FBI have yet to comment on the report.