Ms Andrea Teo, the producer behind the ground-breaking and popular Channel 5 sitcoms Under One Roof and Phua Chu Kang Pte Ltd, died on Thursday (Aug 25) following a two-year struggle with cancer.

A letter sent to The Straits Times by friend and former broadcasting colleague Woon Tai Ho, and containing tributes from others who had known her, hailed her as an "innovator and trailblazer".

Ms Teo's Under One Roof aired from 1995 to 2003, and its cast, which included among others, Mr Moses Lim, Ms Koh Chieng Mun and Ms Vernetta Lopez, became household names.

The show, about a rambunctious family headed by minimart owner Tan Ah Teck (Mr Lim) and their friends and neighbours, was the first made-in-Singapore English-language sitcom and was exported to other markets such as Canada and Australia.

Speaking to The New Paper in 2000, Ms Teo said that she found fulfilment in "making people happy, make them think a bit, make them smile".

"What I like about TV is that you can reach people, you can touch them."

She said in the interview she had been told that at a cancer ward, the show was a highlight of the day.

"They were all waiting for Under One Roof to come on. I think to be able to do that is very cool," she said.

Ms Teo's first foray into television comedy was the short-lived sketch show The Ra Ra Show (1993). She also co-created the sitcom Phua Chu Kang Pte Ltd (1997 to 2007), which was also a hit.

In a first for local broadcasting, the three shows featured characters using local accents as well as Singlish, a touch that would prove as controversial as it was popular.

The Ra Ra Show's run was cut short following complaints about its Singlish and racy themes. Ms Teo's other two shows would also come under pressure over the use of the vernacular. 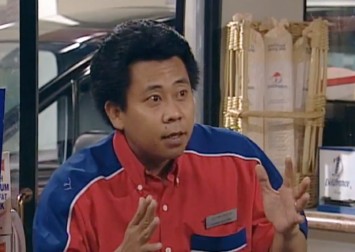 In the letter, former colleague Jaki Fisher says that Ms Teo "decided it was time for Singapore to have its own sketch comedy show".

"The fact that she'd never done comedy before didn't faze her. A few months later, The Ra Ra Show was born, and Singlish was first heard on TV."

Actress Koh, who played Dolly, Tan's wife, in Under One Roof, said: "She believed in a Singaporean brand of humour and pushed the envelope in the face of objections from the powers that be, because she believed in the Singaporean identity."

From 2002 to 2008, she was with Asia Pacific Breweries, where she had a hand in creating the craft beer Archipelago as well as concepts such as cold-room bar Eski Bar in Boat Quay.

Ms Teo's next move was to Resorts World Sentosa, where she worked on building up the entertainment team to handle thousands of shows a month at Universal Studios Singapore.

She then left for South Korea, as vice-president of attractions and entertainment at Jeju Shinhwa World.

Ms Teo, whose last job was consulting for Sentosa Development Corporation, was also known for her ability as a keyboardist, playing for local musicians Mark Chan, Jacintha Abisheganaden and Reema Raheem, among others.

In 1994, the CEO of TCS Lee Cheok Yew invited a few of us to watch the pilot recording of the first local sitcom, Under...

Writer, chef and restaurateur Violet Oon had known Ms Teo as a friend since 1999.

"I remember her as the superb pianist whose musicianship made singing to her piano a dream come true. She was a renaissance person whose creativity touched TV, beer and theme parks.

"Andrea lives on in the laughter and joy so many in Singapore remember," Ms Oon told The Straits Times.

Musician Dick Lee, who had worked with Ms Teo at SPH MediaWorks and later, at Resorts World Sentosa, where they created the musical Lightseeker, said she was a "visionary".

"It was a joy to build dreams again with such a fearless talent," he said.

In an e-mail statement, a spokesman for Mediacorp said that it was "deeply saddened by the passing of our former colleague, Andrea Teo".

"She will be dearly missed by all who have worked with her. Andrea was well known and regarded for her work on some of our best-loved comedies, such as Under One Roof and Phua Chu Kang.

"This is a devastating loss and we offer our deepest condolences to Andrea's family and friends."

Goodbye my dearest, dearest friend Andrea Teo Yun Ai 韵爱 Heartbroken.. You have left us bereft, you are so loved, always,...