Felicia Chin lies in coffin for the first time, gets $20 ang bao to ward off misfortune

The month of October usually heralds the arrival of pumpkin spice lattes Halloween and with it, our annual dose of spooky stories.

On the latest episode of Mediacorp web series Just Swipe Lah, host Juin Teh visited the set of upcoming series Leave No Soul Behind and Mr Zhou's Ghost Stories to get the tea from local celebrities on their paranormal encounters and filming rituals.

First up was the beloved actress Felicia Chin who, for the first time in her career, had to lie in a coffin. Due to customary practices, she was given a $20 red packet to ward off misfortune.

She said: "I followed the custom. They said I had to put the ang bao under my feet. This is my first time acting in such a scene, having to lie in a coffin. The ang bao is actually more than 20 cents. I received a $20 angbao."

It seems that the value increases based on what kind of scenes they were filming. Juin shared that she received a 20-cent ang bao when she filmed in the cemetery and it was $2 when she took a funeral portrait.

Felicia, 36, said that she was "a little shaken" when she saw the setup for her character's funeral scene but added that lying in the coffin was "a unique experience".

"Apart from actors, most people will never know how it feels to lie in a coffin."

And though she spent a long time just lying there, the actress wasn't spacing out. In fact, she spent the time reflecting on her life and what she has achieved.

Read Also
'I felt I was being choked': Paranormal investigator who hunts for ghosts in Singapore 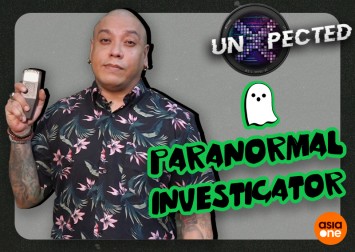 She said: "As I was lying there, I wondered, 'If one day, something like that happens, what is the life that I've led? What have I done in my life?' You know, thoughts like that will come to mind."

Felicia might also have experienced a paranormal encounter while filming the show. She recounted an instance where she had an early shift and was leaving her home around 6.30am when she saw the neighbour's kid outside their door with a white blanket over his head.

"Usually, I'll definitely go over and ask if he's okay. But that scenario made me feel like I didn't know if he was human or [a ghost]. But it also allowed me to really understand that if something like that were to happen to you in real life, maybe it's that kind of feeling. So I could bring that feeling over into my role," she added.

Juin also spoke to other local celebrities to suss out the rituals the production team usually observes when filming.

According to Ayden Sng, there's a rather fascinating ritual which is unrelated to ghost shows. Crews use chilli and a head of garlic to 'pray' for good weather. It supposedly worked, though.

He said that once, it started raining while they were filming but the rain stopped after they performed the ritual.

Chantalle Ng shared that she was told not to sing a Hokkien song known as Cloudy Day but another song titled Tai Yang Gong Gong (Sun God Gets Up Early).

She exclaimed in disbelief: "Where did these superstitions come from?"

However, it appears that she might have been pranked as Juin said this was the first she's heard of such a ritual.