The former Desperate Housewives star was sentenced to two weeks behind bars and given a hefty fine after she pleaded guilty to charges of mail fraud and honest services mail fraud following the college admissions scandal, but she's said to be "holding up" in jail and is coping better than her family thought she would.

A source said: "Felicity is doing really well and she's holding up."

The 56-year-old actress' husband William H. Macy and their 17-year-old daughter Georgia visited her at the Federal Correctional Institute in Dublin, California, on Saturday (Oct 19) but the teenager struggled to see her mother in prison gear.

The insider explained: "The visits went nicely. They spent a lot of time together. They sat in the visitors room for a few hours and spoke. 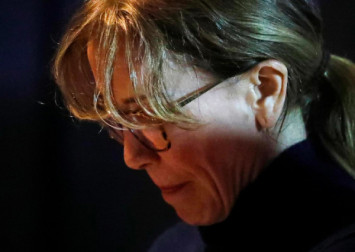 "Her mother's in prison garb -- it's very difficult. This is not to be taken lightly. It's federal prison. This is not 'club fed' -- it's just not. It's not like the articles online.

"She's in a room with inmates with a toilet in the middle of the floor. She's in prison garb and there's work duty -- it's pretty serious stuff."

Felicity - who also has 19-year-old daughter Sophia with William - told the court last week that she was "deeply sorry" for actions after she admitted to paying money to a scheme to secure a top university spot for her daughter.

She told the court: "I take full responsibility for my actions and as a first step for making amends for my crime, I will accept whatever punishment you deem appropriate. On the way to the testing centre, I thought to myself, 'Turn around, turn the car around.' One of the hardest things was after my arrest, my daughter said, 'I don't know who you are anymore.' I am so sorry Sophia.

"I was frightened, I was stupid and I was so wrong. I am deeply ashamed of what I have done. I have inflicted more damage than I could have imagined. I realise now that love and truth must go hand and hand."