LOS ANGELES - The Warner Bros. movie studio is in the early stages of developing a sequel to its groundbreaking romantic comedy "Crazy Rich Asians," a source with knowledge of the matter said on Wednesday.

It is unclear when a sequel could reach theatres. No script has been written and no deals have yet been signed with the movie's screenwriters, the source said.

Jon M. Chu plans to return to direct the new film, his publicist confirmed. But he is first scheduled to direct an adaptation of Lin-Manuel Miranda's musical "In the Heights," which is scheduled for release in June 2020.

The Hollywood Reporter first reported plans for a sequel. The trade publication said the next instalment would be based on author Kevin Kwan's second book in a trilogy, "China Rich Girlfriend."

On its debut weekend, the movie topped US and Canadian box offices with $26.5 million in ticket sales from Friday to Sunday, and sales had topped $44 million through Tuesday. The movie is now starting to roll out in theatres around the world.

In the film, Wu plays a New York economics professor who flies to Singapore to meet her boyfriend's family only to discover it is one of the wealthiest in the country. The cast was drawn from Taiwan, Britain, China, Malaysia, the Philippines, the United States and Australia, along with Singapore. 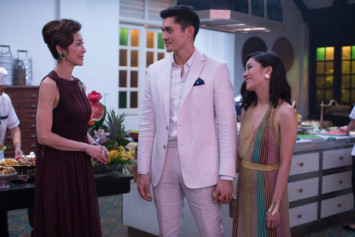 The main cast also is expected to return for the sequel, The Hollywood Reporter said. The new film also will tell the story of Astrid, the cousin of Golding's character, Nick, with a man named Charlie played by "Glee" alum Harry Shum Jr., Chu told the trade publication.

"We needed to hire somebody who can really act, because in time she becomes much more significant," he said.

The plans for a sequel emerged as Singapore's defence ministry said that author Kwan, also an executive producer on the "Crazy Rich Asians" film, is wanted for defaulting on his compulsory military service. Kwan could not be reached for comment.

Warner Bros. is a unit of AT&T Inc.