The photographer behind the snapshot of Johnny Depp and Amber Heard at Raffles Hotel in 2015 has been found.

Shortly after local photographer Russel Wong posted the photo on his Instagram page and clarified that he did not take the picture, the real photographer — who uses the Instagram handle Ibikeshootfly — left a comment on his post.

"Hi Russel, I took this shot back in 2015 and I also have the original photo in full colour," she wrote, adding that a friend had alerted her to the photo going around the internet.

Ibikeshootfly, whose real name is Tan Li Tong, also posted a series of Instagram Stories regarding the photo on Sunday (May 29), stating that she took the photo while she was an intern at Raffles Hotel back in 2015.

"So apparently this post is being used in court as evidence? Who would have thought a photo taken by lil old me," she wrote.

AsiaOne has reached out to Tan, who declined to comment on the photo.

The photo of Johnny and Amber first resurfaced on Wong's Instagram page on May 20 with the caption "Why not! Happy honeymoon at the Raffles Hotel 2015 with Johnny Depp and Amber Heard!", along with the hashtag #justiceforjohnnydepp. 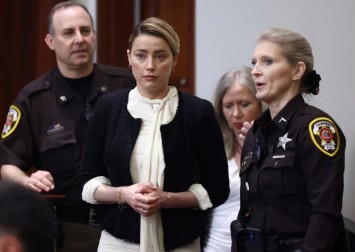 Russel's post was subsequently used as part of Johnny's evidence during the trial to refute Amber's allegations that the bruises on his face in another photo taken during that period were Photoshopped.

A week later, Russel made a clarification post to explain that he did not take the photo, but merely "remembered" seeing the photo hanging at Raffles Hotel, where the actor and actress had their honeymoon.

"I searched on the net that evening and found many blogs that featured it and noticed that same bruise on his face as the train shot. I then shared it on my Instagram in the late evening. In an hour, I was contacted by Johnny's lawyers and that's how it happened!" he said.

ALSO READ: 'I just wanted to do the right thing': Singaporean's Instagram post of Depp and Heard featured in trial