Gillian Chung is officially a Mrs.

The 37-year-old Hong Kong singer-actress and her Taiwanese doctor beau, Michael Lai registered their marriage in a simple but romantic ceremony in Hong Kong on Tuesday (Dec 18), with about 30 close friends and family in attendance, media sources reported.

The couple held a   wedding banquet in Los Angeles earlier in May, but it was not officiated by a solemniser. They will be hosting a second dinner banquet tomorrow (Dec 20) in Hong Kong. 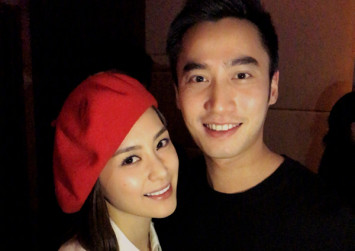 On Tuesday, Chung wore a short blush-pink dress with a plunging neckline for the waterfront ceremony at Tsim Sha Tsui, while Lai, 32, looked dapper in a blue suit.

Guests at the event included Chung's good friends from the industry, such as Joey Yung, Leo Ku, and of course her former Twins bandmate, Charlene Choi.

Hong Kong magnate and Emperor Entertainment Group chairman, Albert Yeung, who was among the attendees, had some "stern" words for Lai during the couple's tea ceremony.

Yeung warned Lai to "be good to Cheung, otherwise, don't come back to Hong Kong," to laughs from guests.

Lai was previously married to online apparel entrepreneur, Ivy Chao, for six months in 2016. He began dating Chung after they separated, reported JayneStars.