Gordon Ramsay once wore son's underwear because he missed him

Gordon Ramsay misses his son Jack now he's moved out to university - and he wore the teenager's underwear to reflect on his absence.

The 51-year-old chef - who has Megan, 20, twins Jack and Holly, 18, and 16-year-old Tilly with wife Tana - borrowed some underwear from the only other male in his household and it was only when he put the garments on that he realised how much he wanted his son, who is studying at Exeter University, to be back home.

He admitted: "I went upstairs to Jack's bedroom last weekend and I opened the door. His socks and pants are there - and five minutes later I am wearing them.

"He is the same size. All mine were in the bloody wash so I thought, 'Jack has nicked my bloody pants again'. Low and behold upstairs in his drawer. So I put them on and just sat on the bed thinking, 'Damn bud I miss you'. Seriously."

Though Gordon was prepared for Jack leaving home, he was still "gutted" when he waved him off to embark on the next chapter of his life.

He told talk show host James Corden: "It was really tough. I spent all summer with Jack, swimming every day, so I knew this moment was coming. I was gutted.

"We had 20 minutes to unload the car and get him into this tiny little flat, like a prison cell, I was gutted. We unpacked all this stuff and had to say goodbye.

Read Also
WATCH: Gordon Ramsay on his early struggles, and why he's blunt and brutal 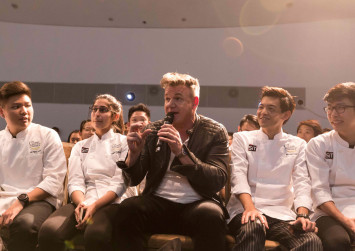 And Jack's twin sister has also moved out of home - even though she's studying not far from her family home.

Tilly is now the only one of Gordon and Tana's children living with them and they want to do all they can to get her to stay.

He quipped: "[She's our] princess, we're slowing down the studies and asking if she can leave home at 25, manipulation."