Director James Gunn is something of an anomaly in Hollywood, especially among the exclusive cadre of creators who make superhero movies.

He's written and directed superhero films for Marvel/Disney, DC Comics/Warner and also independently (Super, 2010), and with Guardians of the Galaxy Holiday Special on Disney+, is also the first to have directed, written and produced something for competing streaming services, after Peacemaker for HBO Max earlier this year.

To say that expectations are high for this series is an understatement, as Gunn was responsible for the amazing success of the first two Guardians of the Galaxy films, and is now shepherding their debut on Disney+, as part of the larger Marvel Cinematic Universe (MCU).

This group of heroes, comprising a half-human male who was taken from Earth as a boy (Peter Quill aka Star-Lord, Chris Pratt), a genetically-engineered raccoon-based mercenary (Rocket Racoon, Bradley Cooper), a tree-like being (Groot, Vin Diesel), a skilled warrior (Drax the Destroyer, Dave Bautista) and an emphatic female alien (Mantis, Pom Klementieff) have had the least interaction with the planet Earth, and all that is about to change slightly in this 44-minute special.

A standalone entry that serves as a prequel to the upcoming Vol. 3, this Holiday Special is an early celebration of the festive spirit, and seeks to examine the team's dynamics through a breezy mini-adventure.

In the superhero world that's often besieged by war, loss, and destruction, found families are the norm and never the exception, and the motley Guardians of the Galaxy crew basks in the comfort of different individuals, as they take a detour and bring audiences on a lighthearted yet sincere outing filled with plenty of humour, fuzzy moments, and fun nods for Marvel fans – and then some.

As the second Special Presentation in the MCU, after Werewolf by Night, this Disney+ jaunt makes it free of the heavy expectations that come with the mainline movies and follow-ups.

Even with Gunn at the helm, there's a clear intention to go bold and non-formulaic from the get-go, with the opening sequences decked out in animation art. Recounting an unpleasant childhood memory involving Quill, Kraglin, and Yondu's disdain for Christmas, the special later transitions to the all-too-familiar live-action format.

This memory, told to Mantis and Drax by Kraglin (Sean Gunn) in present day, sets the empath on a quest to help Quill (Chris Pratt) rediscover the joy of Christmas and celebrate the occasion together as a team. To do so, she heads to Earth with Drax and goes on a hunt to find the best present for their leader.

It's on the planet that the pair's chemistry is fully unleashed, continuing in the vein of their interesting and chaotic character dynamic.

Like part of a standard routine, they poke fun at each other, argue incessantly, and get irritated at the other's actions, but also stand by one another through all the trouble and misunderstandings they unintentionally invite.

These moments are incredibly entertaining to watch, and for the most part, never fail to bring to a smile.

Mantis and Drax cannot be any more different – in a clubbing scene, the former has fun dancing while the latter only drinks at the counter, claiming that dancing is, for the lack of a better word, lame, whereas an action sequence sees Mantis putting hostile forces to sleep, as opposed to Drax's approach of flipping their vehicle over (yes, Guardians of the Galaxy Holiday Special does have some action scenes).

However, they are also very similar in other ways. In one part of the special, Mantis chastises Drax for taking an item from someone's lawn without permission, but she does the same a few moments later, quipping that it "must be there for a reason".

As far as the character portrayals go, Bautista, and in particular, Klementieff are deserving of praise, with their playful antics and genuine relationship bringing life into the lighthearted adventure. The deal would have been even sweeter, though, if the other Guardians, such as Nebula (Karen Gillan), had more screen time and interactions with one another.

Contributing to the comedic element is the concoction of fourth wall-breaking jokes and easter eggs that reference past Marvel works or pop culture.

A prime example of this is when Mantis bumps into a Captain America cosplayer on the streets, gets excited, shouts "Steve!" and goes over to hug him tightly, causing the cosplayer to flee in terror. Keep your ears open, and you may even catch a DC nod somewhere.

Where familiar faces return, new ones follow. Guardians of the Galaxy Holiday Special marks the debut of Kevin Bacon, who plays as a fictionalised version of himself and is a hero to Quill.

The actor takes to his role with adept proficiency, and in a show of great delight, actually joins in the fun of breaking the fourth wall. A hero to Quill, Bacon might be new to the MCU, but he's no stranger to Gunn, having appeared in Super.

The band the Old 97's also make an appearance here, with frontman Rhett Miller belting out the catchy notes of "I Don't Know What Christmas Is [But Christmastime Is Here]" against the rock-infused instrumentals. 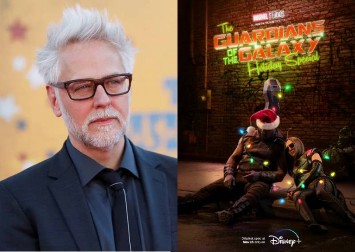 Written by director James Gunn himself, the song continues the special's approach of not taking itself seriously, sporting lyrics like "What the hell is a turtledove?". It's all a pretty good-humoured affair, and does a great job at setting the upbeat tone for the rest of the short.

To complement the opening scene, Guardians of the Galaxy Holiday Special ends off in the same animated style that, while creatively interesting, can be jarring for viewers.

The art takes a while to get used to, and the animation isn't the smoothest, so the change in the formula doesn't quite take off here as well as it did for Werewolf by Night, which features an all-colour transition from black-and-white at the end. This special, in a similar vein, will also close off the chapter with small surprises that further add to the emotional impact.

Christmas may be a month away, but fans of Marvel and the Guardians (particularly Drax and Mantis) will find that the latest special is an early present from Marvel.

Despite its humorous and lighthearted approach, it never did lose the human touch along the way – amidst the laughter and chaos is the reminder that loved ones are what bring and shape the holiday's significance.

Guardians of the Galaxy Holiday Special packs in a (w)ho-ho-ho(le) load of ribbing fun to tell a heartwarming story about found family dynamics, festive joy, and the meaning of Christmas.

ALSO READ: Disenchanted review: A forgettable journey back into the world of fairy tales