Laverne Cox and her friend were targeted in a transphobic attack.

The Orange is the New Black actress is still 'in shock' following the incident, which occurred when she was walking with a pal in Los Angeles' Griffith Park and a guy asked them for the time followed by 'guy or girl?'.

Speaking in a video on her Instagram account, she said: 'The friend that I'm with looks at his watch and tells him the time, and then the guy who asked for the time says to my friend, 'Guy or girl? My friend says, 'F*** off.' '

'The guy is like hitting my friend, and then my friend is going toward him and I'm like 'Holy s***.' I pull out my phone and I call to dial 911, and all of a sudden it's over and the guy is gone.'

Laverne believes the offensive question was aimed at her rather than her pal.

She said: 'The guy really wanted me to answer so that he could spook whether I'm trans or not. I don't know why, I don't know why it matters. At the end of the day, it's like who cares?' 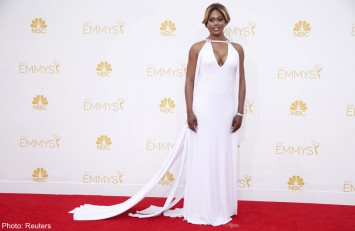 'I'm in a hoodie and yoga pants, I'm completely covered up, I've got my mask on. Who cares if I'm trans? How does this affect your life?'

'This isn't shocking to me. Obviously, this is my life. I've dealt with this a lot, but it never fails to be shocking.'

Laverne admitted she has been 'harassed and bullied [her] whole life', and said the incident has reminded her it is 'not safe in the world'.

'It doesn't matter who you are. You can be Laverne Cox, you know, or whatever that means. If you're trans, you're going to experience stuff like this.'

Laverne admitted she and her pal are 'fine' following the attack, and warned others to 'be careful'.

Captioning the clip, she wrote: 'We Were Just Attacked in Griffith Park. We are fine. Be careful out there. #TransIsBeautiful (sic)'.

Just last week, Laverne spoke out about how she wants more to be done to 'end violence against transgender people'.

She said: 'I would love the media talking about solutions to ending violence against trans people.'

'Helping to improve the material conditions of trans people through employment opportunities and housing could reduce violence against trans people.'