All has been rather quiet with Marco Ngai since his ex-wife was caught cheating on him.

However, the 52-year-old Hong Kong actor recently revealed the possibility of moving to Malaysia with his nine-year-old daughter.

According to media reports, Marco has divorced his wife Zhang Lihua and is currently taking care of his daughter Jessica as a single parent. He also confessed his intentions to sell his house in Sai Kung and downgrade to a smaller rental apartment. 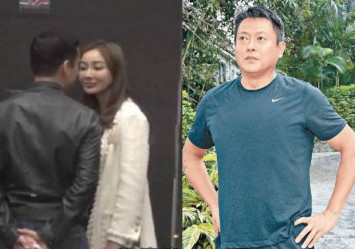 He reportedly said: "It's only my daughter and me so we don't need a big house. If we sell the house, we can have more cash on hand. Otherwise, I can move to Malaysia and build my second home there. The education system there is also less stressful for kids."

Due to the coronavirus pandemic, Jessica is now taking her classes online and Marco helps her with her homework. He also invites his daughter's friends over so they can study together.

Despite being in a single-parent family, Jessica is pretty mature, said Marco, as she spends time cooking and watching shows with him. She's even declared her intentions to live with Marco in the future after she gets married.

Marco added: "She's very obedient. Due to the pandemic, I'm not able to work and I have no income, so she tells me to save money. Even if her clothes are torn, she doesn't want to throw them away."

Wife cheated on him

In January, Marco's ex-wife was spotted behaving intimately with a foreign banker.

They were photographed having a meal together and kissing in a taxi before heading up to his apartment.

In response to the pictures of the couple, Marco said: "Many people like to kiss in the car, many things happen in taxis.

"I don't know. I don't know anything at all. There's only my daughter in my heart," he added.

At that time, it was unclear if Marco intended to divorce Zhang but if the recent reports are true, it seems that the couple have separated.

After the news broke, Zhang told the media that she and Marco have been sleeping in separate rooms for five years, but they still live in the same house for their daughter's sake.