'How could I have time to get my breasts done?': Ann Kok speaks out on iconic 1996 Star Awards outfit

Back when an actress's fashion choices were the most scandalous things in local showbiz, Ann Kok made waves when she appeared at the 1996 Star Awards show with a sheer black top – her bra clearly visible.

Speaking on the latest episode of the meWATCH talk show Hear U Out, the 48-year-old said she was shocked at how the outfit looked onscreen as well. She explained: "The outfit didn't give that feeling when we did the fitting. Not at all. Strange, huh? Who would have expected all that hoo-ha that night?"

In the aftermath of the incident (or some might call a fashion faux pas?), Ann admitted that she was emotionally affected by the negative reaction and she felt that people "weren't as open-minded" back then.

"When something like that happened, I was worried about my family above all. I wasn't sure if my parents could accept it. As it turned out, they didn't put any pressure on me at all. Not at all," she shared.

However, there were rumours from people that she had work done on her breasts. At 22, Ann wasn't sure whether she should respond and possibly make things worse or stay silent and let people take it as a sign of admission.

Sharing her thoughts back then, she said: "I thought it strange at first. How could I have time to get my breasts done? I started filming the moment I joined the industry in 1993."

Ann was also advised to not let such things affect her because that was celebrity news and as an artiste, she had to accept and understand it – good or bad.

That said, the actress admitted that was a silver lining amid the 'scandal' as it opened doors into the fashion industry when "people who were more open-minded came to know about me".

Local TV host Quan Yi Fong also pointed out that Ann went on to do a series of sexy magazine and cover shoots and they all turned out well.

Even though Ann appeared to be nude in some of the photos that were displayed on the show, the actress said that she was actually wearing a bikini that was digitally edited out. She also shared that when doing such sexy shoots, she has to at least wear a bikini and it "can't be a G-string". 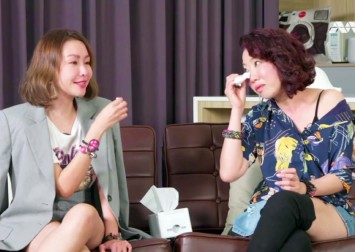 The actress agreed with Yi Fong that she was okay with "wearing less" but not if she was "exposing too much". She also recalled the one time she requested to clear the set when she was filming a bed scene with Taiwanese actor Joseph Chang for the Channel U drama Cooking Without Clothes.