Vivian Lai had a health scare when she realised the entire left side of her body was numb and weak.

Some of us take our health for granted, until warning signs and minor illnesses jot us out of complacency.

In an interview with Shin Min Daily News last Thursday (July 28), Vivian Lai revealed that she had a huge health scare five years ago when the left side of her body became numb and weak.

"I suddenly realised the left side of my body felt paralysed, especially my left hand which was completely numb — I couldn't even feel needle pricks," Vivian said.

"Although this feeling didn't occur often, it always happened several times a week and would last a few hours. After a week, the discomfort was increasingly worrying and my husband and daughters were all very frightened."

The thought that she had suffered a minor stroke crossed her mind, but the 44-year-old actress didn't dare to believe it, telling herself that she was "still young".

After consulting with a doctor, Vivian found out that she has spinal disc displacement. But the solution offered to her wasn't the best — an operation that only has a 50 per cent chance of success.

Unwilling to take the chance, Vivian instead set her sights on traditional Chinese medicine (TCM), which she told 8World in a report today (Aug 2) has improved her condition significantly. 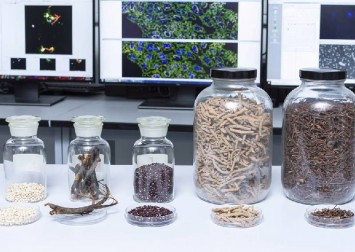 On top of painkillers, Vivian now has regular acupuncture and bojin massage sessions, she said. She also complements these with nourishing floral tea from her own shop Teabrary to promote blood circulation.

But her health isn't Vivian's only concern — she has also started providing healthier foods to her family.

Said the mother of two: "I tell my daughters to drink less iced water and consume more foods that are good for the body, such as black bean soup. I also try to add more wood ear into the food I cook."

Aside from treatment for her herniated spinal disc, Vivian and her daughters, Vera, 16, and Ariel, 12, also use TCM for skincare.

Speaking on the TCM practice known as gua sha (scraping), Vivian claimed: "If you use gua sha over a long period and use the correct technique on your face, you'll never need to go for aesthetic [treatments].

"The right products and proper techniques will enhance your complexion and your skin will glow."

ALSO READ: Kourtney Kardashian ate her placenta and called it life-changing. Should you eat yours? Experts weigh in