For the first time in their career spanning more than 40 years, Irish rock band U2 will be playing in Singapore, although the date and venue have yet to be announced.

The show, announced via the band's website, u2.com, is part of an extension of their 30th-anniversary tour for their seminal album, The Joshua Tree, and includes stops in New Zealand, Australia, Japan and, for the first time, Singapore and South Korea.

The shows in the Asia-Pacific region announced so far kick off on Nov 8 in Auckland, New Zealand, and run until Dec 8 in Seoul, South Korea.

The band - comprising frontman Bono, guitarist the Edge, bassist Adam Clayton and drummer Larry Mullen Jr - are no strangers to sold-out arenas around the world. 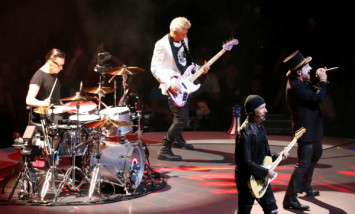 In 2017, U2 embarked on a worldwide tour celebrating the 30th anniversary of The Joshua Tree, in which they played the landmark 1987 album in full.

The album has spawned worldwide hit singles, such as With Or Without You, I Still Haven't Found What I'm Looking For and Where The Streets Have No Name.

Based on the past legs of the tour, the set list was also interspersed with songs from their decades-long catalogue.

In a note on their website, Bono said: "It's taken me 30 years to learn how to sing these songs and it's great to be able to say I've finally caught up with the band.

"Our audience has given The Joshua Tree a whole new life on this tour. Doing these shows has been very special for us, a lot of emotion.

"From the despair of how relevant some of the dark songs are to the joy, pure fun of the staging… it's quite a ride."

He added: "And now, we get to do it all over again. Auckland, Brisbane, Melbourne, Adelaide, Perth, Sydney, Tokyo, Singapore, Seoul… We're coming for you."

The Edge said: "We really, really wanted to bring The Joshua Tree to New Zealand, Australia and Asia. We promised we would and, finally, now we can say we will see you in November.

"It's going to feel like a homecoming and we are very excited."