In the wake of the scandal, Seo Yea-ji's lead role in an upcoming drama, Island, will be recast.

K-drama actress Seo Yea-ji, 31, who has in the past week been embroiled in controversy over how she had allegedly controlled her ex-boyfriend Kim Jung-hyun, has lost a slew of endorsement deals.

The It's Okay To Not Be Okay (2020) star was swiftly dropped from advertisements by health and lifestyle brand New Origin, mask label AER and cosmetics brand Luna, among others.

In the wake of the scandal, her lead role in an upcoming drama, Island, which was due to start filming in June, will be recast.

In addition, a former staff member from her management agency has spoken up about her alleged verbal abuse, threats and unreasonable behaviour in an explosive tell-all.

The anonymous post gave details such as the actress yelling at the staff over small mistakes, blowing cigarette smoke into their faces and checking their phones to ensure they did not record her behaviour.

"Whenever she said she was in a bad mood, she never ate anything and so we were unable to eat. She also told us that actors are people who work solely with their emotions so we were expected to give in to everything she wanted."

The post went on: "If there were bad rumours going around about her, she would come up to us and say, 'I know it's you guys. This industry is small, be careful with what you say or I will make it hard for you guys to get jobs'."

To add oil to fire, accusations about her being a bully during her school days have resurfaced, even though her management agency had previously denied them. 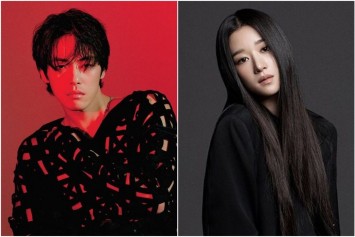 Seo, who started dating Kim in 2018, is alleged to have instructed the actor to avoid all intimate scenes with his co-star Seohyun and other women on the set of K-drama Time (2018).

Text messages allegedly between Seo and Kim, which entertainment news portal Dispatch released on Monday (April 12), show her demanding that he act hostile to other women, as well as send her videos of himself on set so that she could monitor him.

However, her management agency issued a statement on Tuesday to say that it was a lovers' tiff and that Kim had made similar demands.

Kim, 31, who subsequently left the drama citing mental health issues, wrote a lengthy apology on social media on Wednesday and is said to be suffering from depression.