'I've never cried so much for a show before': Desmond Tan and Paige Chua on emotional scenes in When Duty Calls 2

#DesPaige is back after five years.

Local actors Paige Chua and Desmond Tan are reprising their roles as Shen Yixuan and Lu Junguang respectively in the upcoming Chinese drama When Duty Calls 2.

In a recent interview, Paige told AsiaOne she reconnected with the character by watching the show’s first season again. She also had a lot of discussions with Desmond to rebuild the chemistry between them.

The 41-year-old said: “We had to make sure that we were on the same page when we were dealing with the couple and the chemistry between the two characters.

“Especially since they have been dating for four or five years, they must have reached another level in their relationship. So we have to make sure that kind of chemistry is authentic.”

Desmond, 35, told us about the backstory he and Paige developed: “We discussed details like, ‘What have we done in these five years? Have we gone further in our careers? What kind of things have we done physically?’

“That would affect the physical interactions between us and we wanted our audience to feel the couple’s development over the last five years without telling them.”

The first season of the series unravels the personal journeys of Singaporeans who embark on National Service, or serve the country as a reservist or a regular serviceman, all while protecting the aspirations they have, the people they love and their family ties.

Among other storylines, the second season will show the highs and lows of Junguang and Yixuan’s relationship, from a beautiful engagement to premarital phobia and Junguang’s injury leading to a potential breakup.

Despite having been in the industry for over 14 years, Paige said she hates doing emotional scenes sometimes, due to how strenuous they are.

“They are very emotionally taxing and tiring,” she said. “But I understand that, in any romantic story, there must be some obstacles for the couple to overcome.” 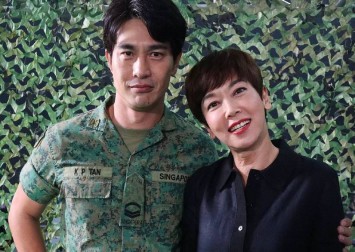 In the show, Junguang goes through the turmoil of a serious injury, and during filming, Desmond felt the raw emotions of blaming his lover and pushing her away in his grief.

“I’ve never cried so much for a show before,” he said. “Our characters and both Paige and I connected very well for the show, so we could grasp each other’s emotions very easily when we did our scenes.”

In these situations, Desmond reckoned, the injured person’s loved ones are those who suffer the most. The scenes where Junguang and Yixuan fight were the most challenging for him.

“I had a lot of scenes where Junguang blames Yixuan. So you know, if you argue with someone that you really love, your heart hurts the most. There were also scenes where we had to push each other away to not hurt each other so these were the scenes that were very hard to play.”

Paige said she was able to be vulnerable to Desmond and portray these heart-wrenching scenes due to their understanding and chemistry.

She explained that it may be hard to portray negative emotions, especially after a day of shooting many scenes or doing multiple takes, so having a partner there to ‘shower’ her with the sadness and heartbreak was important.

“So having a good partner — a supportive partner — is very important. Sometimes it's hard to be alone.”

When Duty Calls 2, which also stars Kym Ng, Pierre Png, Felicia Chin, Tyler Ten, Nick Teo and Edwin Goh, premieres on Channel 8 on Aug 15 at 9pm. It will also be available on demand for free on meWATCH.