Maybe it is not the kiss of death for TVB actress Jacqueline Wong after all.

In April, she was caught kissing singer Andy Hui, 51, in a taxi and had to flee to the United States to escape the media and public scrutiny.

Her boyfriend, TVB actor Kenneth Ma, 45, asked the public to give the affected parties time and space to resolve their situation.

His conduct earned praise but his support for Wong, 30, seemed to cool as the days, and weeks, went by, telling the media that his relationship with her was not always in his thoughts.

Once, he noted that his ideal girlfriend would be someone who was not fixated with material possessions, drawing speculation that he had broken up with Wong.

Now, a new twist has arisen, with the portal ETtoday reporting that Wong has asked him to spend his month-long leave to be with her in the US where she is reportedly taking directing and acting courses.

Ma's family is said to be unsupportive of her request but the actor, whom Wong reportedly keeps in contact with, might be willing to give their relationship another chance. 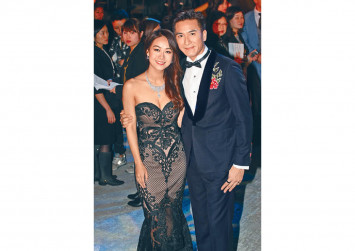 After all, Hui's wife, Cantopop queen Sammi Cheng, vowed to protect their marriage immediately after the scandal broke.

Ma's advisers may also tell him that the scandal has had time to die down and that the public may even applaud any move for reconciliation.

Against that backdrop of a higher probability of the public's willingness to forgive and forget, Hui felt it safe to reappear in public last week.

He has paid a price for his misbehaviour, axing his concerts after sponsors backed out.

Wong was said to face financial ruin after advertisers sought compensation for promotional campaigns aborted in the wake of the scandal.

But she has enjoyed a recent uptick in her fortunes, with TVB not reshooting her scenes in a drama serial called Finding Her Voice.

While logistical and casting challenges were mentioned in ruling out a reshoot, the broadcaster must also be calculating that the public disapproval of Wong is probably over.

If Ma joins her in the US, she will get that long-awaited kiss of life.