James Blunt has been left feeling devastated after burglars raided his Ibiza villa.

The 46-year-old singer has begged the thieves to return his family heirlooms after they broke into his home and stole 100 items, including a pocket watch that belonged to his grandfather.

James told Diario de Ibiza: "My only real sadness is that they took some cufflinks and an old pocket watch that belonged to my grandfather, and a bayonet from my time as a soldier in the Kosovo war in 1999."

James and his wife Sofia spent several months of the coronavirus lockdown in their luxury villa, which they bought back in 2006 for £1.7 million (S$3 million).

The 150-year-old property boasts six bedrooms, a library, a huge swimming pool and a bar, which was rebranded as Blunty's Bar: Where Everybody's Beautiful.

The family were not staying at the holiday home during the time of the burglary but say the property was occupied during the crime in the early hours of Thursday morning (Jan 21).

The thieves also took the singer's clothing, as well as some furniture from the property. 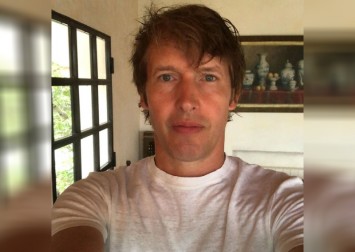 James quipped: "The thieves took about 100 items, including a black-and-white cowhide rug that my wife didn't like, so I suspect she could be involved.

"They also took all my T-shirts and shirts. They can't have a very good sense of aesthetics."

The police suspect there were three people involved in the robbery after scanning the property for fingerprints, and James has since told the local residents he would gladly "pay a reward" for the return of his beloved items.

A friend told the Daily Mail newspaper's Sebastian Shakespeare column: "Blunty's lovely. He invites people back to the house all the time for dinner.

"That's where he does the parties, with people dancing till the early morning. Will he get the watch and cufflinks back? I doubt they're still in Ibiza."