James Cameron had to fight his executives to get the scenes he wanted in Avatar.

Never tell a chef how to cook, and never tell James Cameron how to make a movie.

In an interview with the New York Times last Thursday (Sept 15), James, 68, revealed he had to fight for more flying scenes in Avatar.

"The studio felt that the film should be shorter and that there was too much flying around on the ikran — what the humans call the banshees," James recounted.

But he was unwilling to give in on this.

"That's a place where I just drew a line in the sand and said, 'You know what? I made Titanic. This building that we're meeting in right now, this new half-billion dollar complex on your lot? Titanic paid for that, so I get to do this.'"

According to James, exit polls and data on the movie later showed that the audience loved those scenes the most.

Read Also
Avatar: The Experience brings Pandora to Gardens by the Bay in December 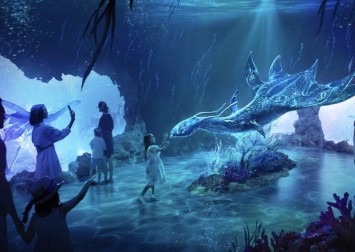 This isn't the first time we've heard about James' imperious attitude towards his work.

In a press conference last Tuesday (Sept 13) that AsiaOne attended, Avatar actress Zoe Saldana (who plays Neytiri) recalled her experience with James: "I would hear him say to some people, 'If I'm coming at you because something isn't working and you come at me with some bull**** story, you better just tell me [you don't know what happened].'"

Spooked by this, 44-year-old Zoe promised herself that she would be honest if ever she couldn't figure out why something went wrong.

Despite it being a startling experience for her, Zoe feels that it was a positive lesson and she's even teaching it to her kids.

"I don't know if they're assimilating it, but I'm going to keep trying," she said.

Dirty diapers and a 'magical journey'

When asked about her favourite memory relating to the movie, Zoe shared the moment she received a phone call from James asking her to act in Avatar.

Unfortunately, she was changing her niece's diaper at the time.

"I'm telling you, I've never enjoyed a dirty diaper the way I enjoyed changing that when I was on the phone with Jim," Zoe laughed.

In that moment, excitement, gratitude and a star-struck sensation was running through her mind as she deliberated the opportunity to work with her idol, James.

Recalling her time working with James on set in a one-piece motion-capture suit, Zoe solemnly said: "My imagination was never as infinite as when I was there. And the last time I remember that was when I was a child.

"It really repurposed me in terms of being super proud about what I do… I can be a part of something truly magnificent and contribute something really significant. And then the reception of it just far exceeded all of our expectations — it was a very magical journey for me."

'Sense of wanting to belong'

With how ubiquitous Avatar has become, the journey that Zoe embarked on has been shared with many across the world.

Sam Worthington, 46, who plays the protagonist Jack Sully, spoke about his thoughts on the matter.

"This was a story about a young guy that went to another planet — he was looking for something, looking to belong, and he found it in another culture that didn't really know anything about.

"I think that sense of belonging permeates with all of us. We're all kind of looking for our own little clan, our own clique or group of people that can comfort us and give us confidence and that we can learn from."

This sense of belonging was what made the people who watched Avatar so emotionally attached to the show, Sam believes.

"I just think that there was a subconscious feeling that maybe we will all globally receive when we watch the movie, this sense of wanting to belong."

Avatar's re-release is currently showing in cinemas across Singapore, while the sequel, Avatar: The Way of Water is expected to release Dec 15 this year.