The former Dawson's Creek star's spouse, Kimberly, admitted her baby losses in November 2019 and June 2020 were "incredibly difficult" to cope with and left her so ill, she wasn't sure she'd make it through.

Kimberly - who has Olivia, 10, Joshua, nine, Annabel, seven, Emilia, five, and Gwendolyn, two, with her spouse - told Entertainment Tonight: "I've had, actually, five miscarriages total, but the last two were significant in that they hospitalised me. Those were incredibly difficult, emotionally and physically.

"I just have faint glimpses of what happened with James, because I kept losing consciousness. He was there giving me comfort, and love, yeah, just a rock."

The 44-year-old actor found it helpful to speak to friends about the sad situation and advised others in a similar situation not to feel they have to rush through their grief.

He said: "I would definitely encourage anybody, especially men, because I can speak to that side of it, to reach out to friends and family and loved ones to talk about it. And give ourselves space, that time to grieve. 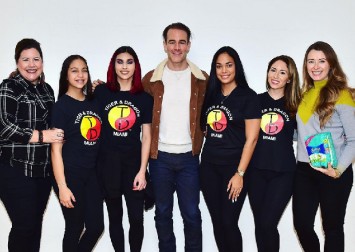 "I was talking to a friend who went through the same thing recently and I said, 'How are you doing?' and he was still going through it. I said, 'The world moves on faster than you heal, doesn't it?'

"He looked at me and said, 'Yeah, it really does.' Because everyone has their life, they're really busy, there's all kinds of craziness going on. But my advice to anybody would be to really take that time and recognise that the world will move on a lot faster than you, so give yourself that space."

When it came to breaking the sad news to their children, the couple chose not to "dance around" the situation.

James said: "We were really honest with them. We told them really just the basic facts of what had happened and what wasn't going to happen. Because they get it. They understand sadness, they feel it. If you're feeling it, they feel it."