SINGAPORE - Popular Japanese boyband Arashi announced on Sunday (Nov 3), the 20th anniversary of their debut CD release, that they will be visiting Singapore next Sunday.

This is the first time the five-man band is coming to Singapore as a group to meet fans.

In a YouTube livestream on their official channel, Arashi announced that they will visit Jakarta, Bangkok, Taipei and Singapore as part of a tour titled Jet Storm.

The group is scheduled to leave Tokyo in a private jet on Saturday to Jakarta and go from Jakarta to Singapore on Sunday. They will leave Singapore the same day to visit Bangkok.

Then, the group will leave Bangkok on Monday to visit Taipei before returning to Tokyo the same day.

Location and timing details have yet to be announced.

The Jet Storm tour is a promotion tour that Arashi took on in 2006 to promote their concerts in Thailand, Taiwan and South Korea.

They reportedly visited these three places in one day on their private jet to meet fans and drum up publicity for their tour.

There is no word yet on whether the band will hold concerts in the four cities.

Arashi is one of the most successful Japanese boybands of all time and its members are often touted as the national idols of Japan.

The band was selected recently to perform at an upcoming festival celebrating the enthronement of Emperor Naruhito, who ascended to Japan's Chrysanthemum Throne this year.

The group, which debuted in 1999 under the management agency Johnny & Associates - a monopoly in the field of Japanese boybands - also announced that they now have official social media accounts on Twitter, Instagram, Tik Tok, Facebook and Chinese microblogging site Weibo. They opened their official YouTube channel in October.

Arashi is the first major act under Johnny & Associates to have several official social media channels. 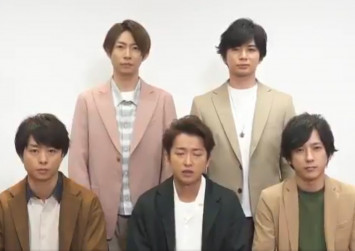 All 64 of the group's single releases and their 65th - Turning Up, which is set to be released on Sunday (Nov 3) - will begin streaming worldwide on Sunday on musical streaming services like Spotify and Apple music.

Member Jun Matsumoto, 36, says: "We wanted our fans to be able to enjoy our music at any time such that even when we go on our hiatus, they won't feel lonely."

In January this year, the band had announced a indefinite hiatus from the end of 2020, after leader Satoshi Ohno, 38, said he wanted to take a break from the entertainment industry to pursue other interests.

Matsumoto adds: "It was the late Johnny Kitagawa's dream that fans around the world can enjoy our music."

Johnny Kitagawa is the founder of Johnny & Associates who died in July at age 87.

The group also announced that they will be holding a concert in Beijing, China, next year though details have yet to be firmed up.