Javier Bardem burst out of a cake dressed as a Bond Girl to celebrate Daniel Craig's birthday.

The Spanish actor treated his Skyfall co-star to a memorable celebration by donning drag to serenade his pal on his big day and admitted it was a rare thing for him to sing in public.

Speaking as part of Variety's Actors on Actors series, Daniel - who recently quit his role as James Bond after five movies, including Skyfall, said: "I remember you were in drag, but I know that's a whole other story."

Javier laughed: "Coming out of a cake. I was supposed to be the Bond girl that night, and oh my God, I was."

The Being the Ricardos star compared his performance to that of screen siren Marilyn Monroe's rendition for President John F Kennedy in 1962.

Javier continued: "Well, [I'm not musical], apart from coming out of birthday cakes dressed like a Bond girl. I sang Happy Birthday to You in my best Marilyn Monroe impersonation. When [the 'Being the Ricardos' team] told me to sing, I was like, 'Are you sure of that? Are you sure you want me singing?' And then I try."

During their chat, the pair laughed about the dangers of at-home interviews after part of the ring light illuminating their conversation injured the Knives Out star without him noticing. 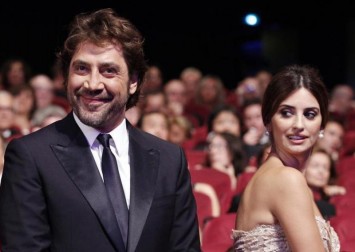 Gesturing to his forehead, Javier asked: "Let me ask you, my friend, this last question: What happened to you here?"

However, the Layer Cake star had not rubbed a bit of lunch on his face but rather it was the "wonderful ring light".

He said: "You know what it was? Christ. So, they've sent me this wonderful ring flash, which I've set up with an iPad in the middle of it. And I went like this like that and it just fell on my head just before we started!"

Daniel quipped: "No wonder I get f***ing injured every time I do a movie!"

After they giggled about it, Daniel said: "Thank you for pointing out. No, literally, I just was setting this up and it went donk and I'm like, 'Ow! Jesus!' I'm not bleeding to death. It's just a whatever. If I don't get injured while filming I'm not doing it properly."