In an Instagram story posted by Jay Chou, the singer can be seen standing beside a man identified as local artist Jahan Loh.

SINGAPORE - Mandopop king Jay Chou is in Singapore once again, this time enjoying an afternoon in town with friends.

A National Gallery spokesman confirmed that Chou was at the museum on Saturday afternoon (Oct 13). Gallery staff took him to view exhibitions between about 5pm and 6pm, the spokesman added.

In a Saturday Instagram story at about 4.55pm, the Taiwanese singer posted a video taken at what is believed to be a rooftop bar at the gallery.

The camera moves from right to left, showing two men sharing a table with him while enjoying a view of the city's skyline.

Shown in the panning video are the Padang, the Esplanade, the Singapore Flyer and the iconic Marina Bay Sands building with the Float at Marina Bay just about visible.

A reader told The Straits Times that the 39-year-old father of two held open a lift door for her at the art museum, which overlooks the Padang. In a second story post at about 6pm, Chou, wearing sunglasses, white sneakers and what appears to be a flannel shirt draped over a black T-shirt and trousers, can be seen standing beside a man identified as local artist Jahan Loh. ST understands that the two are friends.

The first video tags two users and includes the text "remember where i had the F1 concert", presumably referring to when Chou performed as the headlining act at the Padang Stage of the Formula 1 2018 Singapore Airlines Singapore Grand Prix in September. 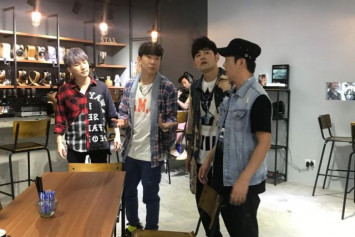 Chou has been spotted in Singapore a number of times in the last few months.

On Sept 11, he was seen touring Sim Lim Square and the S.E.A Aquarium in Resorts World Sentosa with fellow Mandopop heavyweight JJ Lin.

ST reported on Aug 27 that he had made a Sunday visit to Sentosa with his wife, actress Hannah Quinlivan, to walk his pet dogs.

That same weekend, he had already made headlines when he visited the Balestier branch of Founder Bak Kut Teh Cafeteria here, where he is said to be a regular.

Jay Chou revs up crowd at F1 concert in Singapore