What is one big ticket item that you have at home?

For some, it might be the home entertainment system for those late-night binges on Netflix dramas. For others, it could be that luxury mattress with hotel-style linens comes to mind.

For Jeffrey Xu, it's a $10,000 photograph of a lion that hangs over the couch of his two-room Bendemeer condominium.

Another pricey item in his house? A $700 candle that was a housewarming gift.

But how did Jeffrey end up splurging on a black-and-white portrait?

In an 8days article on Dec 15, Jeffrey revealed it was during a shopping trip at ION Orchard — about four to five years ago — with his girlfriend, fellow actress Felicia Chin.

The couple, who have been dating for over five years, was instantly attracted to the piece at an art gallery.

Jeffrey said: "I asked the gallery owner how much it cost, and it was almost S$10,000. I asked Felicia if she likes it, and she said she did. I said I also like it and that I was very moved by it."

While such a majestic (and expensive) art piece deserves the centre stage in any home, Jeffrey shared that it spent the next few years wrapped in a box in storage at a rented HDB flat where he used to live.

Jeffrey said: "Back then, I didn't feel like it was my own home, plus it takes up a lot of space and is very heavy.

"I'm very happy that I finally have somewhere to hang it now."

Jeffrey's most treasured 'mementos' with Felicia

Aside from the expensive photo, he also displays the most treasured 'mementos' that he has with Felicia.

One such keepsake in his apartment is a $2 note that is tacked to a board in the kitchen.

Jeffrey said: "I had a quarrel with Felicia and got so angry that I threw the note on the ground. I later went to pick it up and kept it as a reminder that I shouldn't be like that because I used to have a very bad temper." 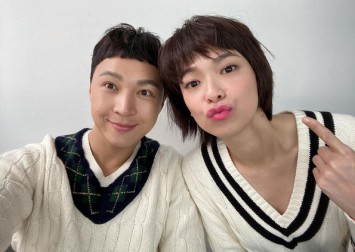 Another Felicia-related item is a group of tiny Smurf figurines, one of which is holding a sign that says "Sorry" – another 'memento' from an argument with his 37-year-old girlfriend.

Although Jeffrey owns an impressive collection of limited-edition sneakers, his most treasured shoe is a pair of cheap flip-flops.

Jeffrey said: "We were out and I was wearing a new pair of shoes that were very uncomfortable and kept hurting my feet, so Felicia went to buy that pair of slippers for me."

Other 'cute' and 'girly' stuff that Felicia had gifted Jeffery include bar stools, designer bedsheets, and soft toys from different countries.

On the Mediacorp online video series #JustSwipeLah, Jeffery showed off the trendy collectable art toys and paraphernalia that he has collected for over 10 years.

These include Kaws and Bearbrick models that have a typical price tag of thousands of dollars.

Jeffery also owns a collection of Slam Dunk comics and said it's a manga series that he really likes.

Jeffrey estimated that he spent close to $30,000 on all the decor and toys in his home.

While Jeffery's hypebeast collection is in abundance, he jokingly remarked that the same could not be said for his personal accolades.

Jeffery proudly displayed two trophies near his walk-in closet — The Top 10 Most Popular Male Artistes gong from Star Awards 2016, and the one he picked up after winning Best Actor in a Supporting Role at the Asian Television Awards 2013.

Jeffrey said: "I don't have much [trophies] right now, so the [space to put them] is quite empty.