She might have missed her 10th Top 10 trophy at the Star Awards last year, but Felicia Chin chooses to remain grateful for the support she has from those around her.

The 37-year-old actress told 8days in an interview last Sunday (April 17) that many have approached her saying they'll vote for her — including fellow actors, colleagues and members of the public.

Even her beau, Jeffrey Xu, 33, has been religiously setting an alarm at 12.01am every day to cast his vote. In addition, Felicia's mother has also been sending the voting link to her group chats to secure votes for her daughter.

However, instead of feeling the pressure to bag a trophy, Felicia says she feels "more of a fear of disappointing others".

She added: "It's really sweet, and these are the things that I hear [from my loved ones]. And I think sometimes it moves me, even more than —  should I say this —  taking the trophy."

"Because the trophy means a lot, but it's the stories [behind the trophy] that really gives weight to what we are holding in our hands."

After the award ceremony last year, where she failed to bag Best Actress or Top 10 Most Popular Female Artistes, Felicia told AsiaOne that she was "okay" and she had "things to learn" from the experience.

"I was reminded today that this is my third Best Actress nomination. I'm quite happy looking back. Not that I've learned all about acting, but I've learnt more about finding a role and I'm happy with my growth. It would have been impossible for me to act as Olivia (in A Jungle Survivor) 10 years ago," she said then. 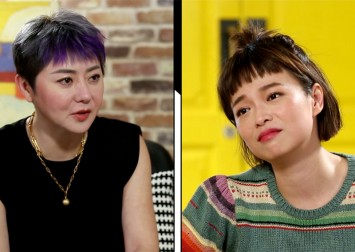 She also confessed that she was peckish during the show, and wanted to chow down on some mee pok.

Hunger pangs aside, the actress also told 8days she was thankful for fellow actor Pierre Png's presence while the Top 10 awards were given out last year.

"He has always been cheering me on and he's one of my biggest supports in this industry, right from when we first acted together in Portrait of Home."

"Pierre's one of the first few people that I knew in this industry, so yeah, I hope that I get to sit next to him this year also," she joked.

ALSO READ: Felicia Chin slapped on first day of Primary 1 and she didn't know what she did wrong