Taiwanese actor Jerry Yan looked downcast when he appeared in public for the first time since model-actress Lin Chi-ling announced her marriage to Japanese actor Akira on June 6.

Yan, who was previously in an on-off relationship with the 44-year-old model, attended Taiwan's Golden Melody Awards on Saturday (June 29) as one of the presenters.

The 42-year-old actor, who was usually clean-shaven in public, was seen at the awards spotting a small beard similar to Akira's.

Yan smiled wryly and declined to answer the media's questions on Lin's marriage on the red carpet. 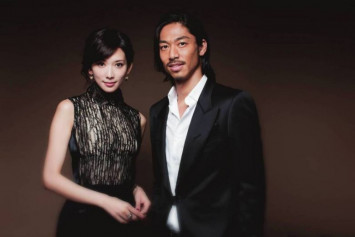 However, he looked different after the awards when he celebrated actress Chen Mei-feng's 63rd birthday.

He was seen smiling as he presented Chen, who has been dubbed Taiwan's most beautiful "obasan (auntie in Japanese)", with a big bouquet of flowers.

On Sunday, Chen posted on Facebook a photo of Yan and her, as she wrote: "Thanks to the most handsome man at the Golden Melody Awards. Every year on this day, I feel touched by your caring birthday wishes."

The actress, famous for TV serials such as Love (2006 to 2008) and Night Market Life (2009 to 2011), also posted several photos of her celebrating her birthday with other Taiwanese actors, including former Channel 8 TV host Jeff Wang.