On Christmas Day, Jet Li offered fans a rare glimpse at his two daughters in a festive greeting on Instagram.

Dressed in black jumpsuits, Jane (left), 18, and Jada, 15, towered over their dad in their platform shoes.

Known to be protective of his family, the martial arts star seldom shares photos of his children with former actress Nina Li Chi, whom he married in 1999.

But that doesn't mean this dad isn't proud of his daughters' achievements.

Last July, he posted on Instagram a photo of Jane when she was a guest speaker at a global conference on women and entrepreneurship in Hangzhou, China.

With the latest photo of the girls, some have speculated that he's paving the way to stardom for his children, but that remains to be seen. 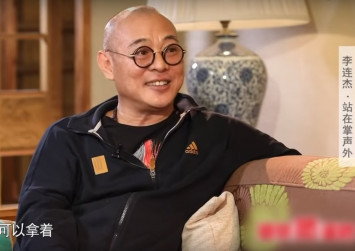 In October, Li revealed in an interview that he only took on a role in the live-action remake of Disney classic Mulan upon the request of his daughters.

Jada asked him, "When a company like Disney wants to make a movie about Chinese culture, why don't you take part in it?"

After a successful acting career, Li has turned his attention to promoting martial arts and his charity One Foundation in recent years.