The 31-year-old actor revealed that he gained close to 12kg while serving the military but added that he worked hard to lose it before he was discharged on April 27.

Recounting his time in the military, he shared a story involving Sunggyu, the leader of K-pop group Infinite, who was doing military service too.

Both the actor and the idol starred in the military musical Shinheung Military Academy.

"He called me and I told him I was doing a V Live. He said he would ask me why I eat so much ramen and leave me comments. He teases me a lot." Chang-wook recalled. 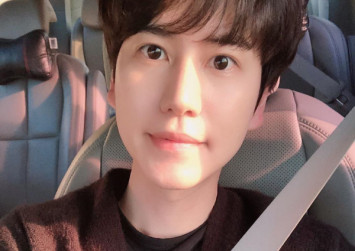 He also shared an incident when he was stationed at Cheorwon county.

"It was the first time I experienced not showering for four to five days. It was a difficult time but a memorable one as well,” Chang-wook said.

Even though he has just been discharged, the actor already has a busy schedule lined up.

For starters, fans would be able to catch a glimpse of the suave actor at his fan meet "Invitation: Late Spring, Early Night", to be held at the Blue Square iMarket Hall in Seoul this Sunday (May 19).

Regarding complaints that it was difficult for fans to get tickets due to the small venue, he expressed that he was sorry towards them and that it was his fault as he was worried that his hiatus would dampen the demand.

Therefore he chose the smallest place possible even when his agency had originally suggested a larger venue.

Small but grand was what Chang-wook promised during his live stream and the actor also revealed that he personally picked the set list for the event.

He also updated fans on what he has been busy with so far.

It's revealed that he would be making his return to the small screen with a new tvN drama loosely translated as Melt Me, which would commence filming soon.

He would also be guest-starring on Channel A's The Fishermen and the City alongside veteran actor Lee Deok-hwa.

#South Korea #actors #In Case You Missed It